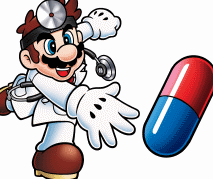 While Nintendo has never provided an official timeline for the many adventures of Mario, forensic science holds the key to piecing together the complicated life of one of this generation's most iconic figures.

By taking into account such physical characteristics as his full-bodied mustache and mental traits such as the acuity needed to perform certain tasks (breaking bricks with cranium), we can make reasonable assumptions about the man's age during the events of each game.

Here, for the first time, is the most accurate representation of Mario's life as we know it.

Age 0-1: Dropped by a stork onto the back of a dinosaur in the Mushroom Kingdom. Rescues brother from the clutches of a magical turtle on a broomstick.

Age 36 and one day: Signs lucrative contract with the Endless Barrel Company. Arrives at the construction site of their future headquarters to take preliminary measurements, winds up rescuing a young woman from the clutches of a large ape.

Age 36 and two days: While connecting the Endless Barrel Company's plumbing system to the city lines, Mario and his brother Luigi happen upon a series of abandoned chambers full of turtles, crabs and flies. They spend the entire day in a murderous rampage, stomping everything they come across.

Age 36 and three days: Magically warped to another dimension, where a Princess must be saved from the clutches of a large turtle. Grows to twice his size, shoots fire from his palms, becomes invincible for short periods of time. Remains speechless throughout the ordeal.

Age 36 and one week: Has a horrific dream in which he must throw vegetables at a large frog.

Age 36, one week and two days: Moonlights as a referee for professional boxing matches including the world championship.

Age 36 and two weeks: Visits Easter Island and Egypt for the express purpose of learning how to fly an airplane and pilot a submarine, winds up rescuing a young woman from the clutches of a large spaceman.

Age 36 and three weeks: Sets off on an adventure to destroy seven medium-sized turtles. Winds up rescuing a young woman from the clutches of a large turtle. Dresses like a raccoon, learns how to fly for short periods of time, hollows out the corpse of a defeated enemy and wears it while throwing hammers at anything that moves, hops about like a frog, and hops some more while in a very large shoe.

Still speechless about the whole situation.

Age 36 and four weeks: With no formal training to speak of, becomes a doctor and perscribes hundreds of pills without consulting a chart of any kind. As the pressure of the job mounts, Mario passes out the pills more rapidly, hoping for the best.

Age 36 and five weeks: While waiting for the malpractice suit to blow over, takes a job as a substitute teacher for a number of typing and painting classes.

Age 36 and six weeks: Dons a cape. Discovers the dinosaur that helped him rescue his brother as an infant, immediately jumps on its back and punches the base of its skull before dumping it in a bottomless pit. Proves the existence of an afterlife when he finds actual ghosts, then kills as many ghosts as he can.

Saves a young woman from the clutches of a large turtle in a teacup.

Age 36 and seven weeks: Goes missing. Is discovered in the clutches of a large turtle by his brother, who saves him.

Age 36 and eight weeks: Recovering from the stress of being abducted, Mario throws himself into sports. He hosts and competes in a number of tournaments involving kart racing, golf, tennis, curling, baseball, board games and brutal hand-to-hand combat.

Age 36 and ten weeks: Levels up, defeats a large robot.

Age 36 and eleven weeks: Learns parkour, jumps into paintings without hesitation. Saves a young woman from the clutches of a large turtle, gets some cake. Speaks up, has nothing interesting to say but manages to come across as a large and scary child.

Age 36 and twelve weeks: Abandons the third dimension, levels up his mustache to save a young woman from a large turtle.

Age 36 and thirteen weeks: Rescued from a haunted mansion by his brother, thanks to a back-mounted vacuum cleaner.

Age 36 and fourteen weeks: Rescues a young woman from a large turtle, thanks to a back-mounted water cannon. Speaks even more, sounds increasingly like an emotionally stunted pedophile.

Age 36 and fifteen weeks: Travels back in time with his brother, teams up with the baby version of himself to save a young woman from the clutches of a large, purple, mushroom-like alien.

Age 36 and sixteen weeks: Turns into a bumblebee, a ghost, pure ice, and travels through the vacuum of space without a helmet. Saves a young woman and a universe from a large turtle, but not before reading a melancholy children's story.

Verbal communication - which wasn't great to begin with - now turns into nonsensical baby-talk.

Age 36 and seventeen weeks: Makes himself very small and wanders around the internal organs of a large turtle. Levels up his mustache a bit more.

Age 36 and eighteen weeks: Competes in the Winter Olympics.

Mass Effect 2
The first Mass Effect was a great game that became commonly accepted as "pretty lame" by internet cynics after a few years had passed, so in 2012 this will probably be "pretty decent". 10/10

S.T.A.L.K.E.R.: Call Of Pripyat
I don't know what surprised me more, the fact this existed or that the series managed to get back on track after Clear Sky. 8/10

Dante's Inferno
A lot of people are offended, and I am too - not because of the misappropriation of a classic literary work, but because this is a ham-fisted clone of one of the most overrated series of all time that doesn't even try to improve on God Of War's numerous shortcomings. 6/10

MAG
If playing an FPS with the PS3 controller doesn't make you feel like an idiot, running for two minutes and being shot by unseen opponents will. 7/10

White Knight Chronicles
Now I see why the press was hyping this game back in 2006 - because they were high as fuck and/or trying to will a decent PS3-exclusive RPG into being. 6/10

No More Heroes 2: Desperate Struggle
As long as these games feature a character named Travis Touchdown, you're pretty much obligated to keep buying them. 8/10

The Sky Crawlers: Innocent Aces
Don't be fooled by the title, this is no Tender Rondo. 5/10

Tatsunoko Vs. Capcom: Ultimate All-Stars
Better than a fighting game on the Wii has any right to be, and depending on how nice your neighborhood is, this might be your only chance to see Frank West from Dead Rising fighting a golden 30-foot robot. 7/10

Glory Of Heracles
If you're a fan of old-school jRPGs, this will literally make you feel like you're playing a fifteen year old game. 6/10