As I spend more time with Battlefield: Bad Company 2, certain patterns begin to make themselves painfully clear. These unfortunate truths fall under the Farrell Rule, which simply states: If there is a chance that something terrible can happen to you while benefiting the enemy, not only will it absolutely happen, but at some point your opponent will luck into the exact opposite of your bad experience.

You... make your way to the top floor of a ruined building. An enemy sniper is peering out of a window, oblivious to your approach as you position yourself directly behind him and attack with your knife. As your stabbing animation takes over, the sniper takes a lucky step back from the window and suddenly your character is looking up at the ceiling. Before you regain control, the sniper shoots you point blank in the back of the head with his sidearm.

They... rush towards you from a good twenty feet away. There is no cover between the two of you, nothing to shield their exposed form. You pull up your shotgun and unload, hitting him square in the chest three times. Unfazed, he plunges the knife into your face. 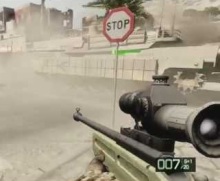 You... realize that half of your team has picked the Recon class. Most of them park on a hilltop for the duration of a match. They get a few kills, rarely use air strikes, and generally keep your team from gaining any momentum. Their clans have names like Hell's Commandos and Kill Team Delta and Daddy's Little Snipers.

You... attempt to take out a medic kit/ammo box in order to help out the teammates that are gathered in a small room with you, but accidentally mash the grenade key. Friendly fire is on.

They... accidentally fling a medic kit/ammo box in the middle of a one-on-one firefight with you. It bounces directly off your face, making your aim go wild for a moment as the enemy switches to a grenade launcher and one-shots you.

You... settle into the gunner seat, pumping yourself up with Ride Of The Valkyries as the helicopter pilot takes off, does a backflip, and crashes on the landing pad.

They... are pleased to discover that their helicopter pilot is an unstoppable force, mowing down your team all match long, neatly evading tracer darts and rocket fire, and winning a Helicopter Pilot Of The Year Award. You didn't know they even made that award.

You... duck against a wall momentarily. Just as you're reloading your weapon, a full squad of the enemy sweeps around the corner. You're hit with so many lethal shots at once that the game doesn't know who to credit with the kill.

They... take out the defibrillator and get ready to revive a fallen teammate. Just as they apply the paddles, you step around the corner and walk directly into the lethal shock.

You... frown as your team falls behind by one point, and half of them immediately switch to the winning side. Have fun with that 10 vs 22 match, and don't expect any reply but "cry more, n00b" when you ask for people to even things out. How they know you're actually crying in real life is a mystery.

They... find that when their team falls behind by one point in a 16 vs 16 game, the best player from your team switches to their side to "even things out".

You... run over someone at full speed with an tank and they don't die.

They... plant C4 on an ATV and detonate it, sending the vehicle sailing across the map, directly onto your head as you parachute to your spawn point.

Dragon Age: Origins - Awakening
As the darkspawn get smarter, your companions' interactions get dumber. 7/10

Metro 2033
Unfortunately, "the production values of S.T.A.L.K.E.R. without all the open world stuff and some really unfun mutant enemies" isn't a description that will convince many people to buy this otherwise interesting shooter. 7/10

Warhammer 40,000: Dawn Of War 2 - Chaos Rising
If you're not sure whether or not your Space Marine has gone bad, just check his armor for black coloration, shake him to see if he has more skulls about his person than usual, and give his helmet a few taps to see if he tries to kill you. 8/10

Final Fantasy XIII
You expect Final Fantasy installments to be either fantastic or complete trainwrecks, but in the tradition of Final Fantasy IX this is just sort of unremarkable in every way. 6/10

Yakuza 3
More dialogue than you can press an X button at, but if you don't mind letting yourself get pulled in it's absolutely worth it. 8/10

God Of War 3
If you enjoyed the previous games you'll probably love this, but the series remains just as soulless, unfun and narrowly focused on QTEs instead of player choice as it always has been. 5/10

Calling
The scariest thing on the Wii isn't this game, but the formation of dust that resembles Glenn Beck's innermost thoughts. 1/10