This article is part of the BarkWire.com series.

Worst Dog of the Week

Compost. No doubt about it. This is one POSM (P.O.S. MUTT). While yours truly was out and about, this hideous mutt launched into attack mode. Luckily BiGDOG knows a thing or two about fighting off dogs. I evaded this dumb pooch by ducking into a nearby Dairy Queen. By the time I finished my second Reese's Pieces Blizzard, that dog was long gone and BiGDOG was much satiated. Nice try, dumbass. Nobody - and I mean body - bests this guy.

Filed under: doggone it, worst dogs, tellin' it like it is. 0 Comments posted. 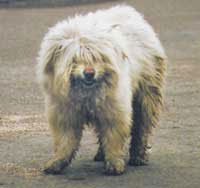 The One and Only. The Auditor.In the halls of great dogs, there are many. Obviously BiGDOG is pretty biased in favor of the greatest dog of them all -- Panzer -- but every so often he has to pay his respects to another legend. That said, gotta give a big, big shout out to the late, great AUDITOR.

This big bundle of hair lived in a pool of toxic sludge for 17 years. Never asked for any help and stood his ground the whole time. All these idiots whining about the environment ought to shut the hell up and take a lesson from Auditor. If you don't act like a baby, you can live through just about anything.

Filed under: top dogs, panzer, tellin' it like it is. 0 Comments posted.

Just a quick update for you BiGDOG fans out there. I'm still battling the POWERS THAT BE over my unfair banning at BarkWire.com. Looks to me like those fascists have no intention of honoring the law. Guess they've never read the constitution? But then again, these are probably the same idiots throwing their votes away on McCain and Obama.

BiGDOG's gonna keep this battle going, because it's not about reviewing dogs anymore. It's about defending free speech and the right to dissent. If I let this one slide, there's no telling what's next. Shredding the Bill of Rights? Government-sanctioned slavery? I mean if the Free Market demands slavery, that's one thing. But not the government.

Meanwhile BiGDOG is reporting the truth each and every day in alt.pets.dogs.bigdogs and on dogranks.net. Dogranks is a new site and even though it is already showing signs of having too many freakin' newbs, it's the last dog website that hasn't outright banned free speech (and BiGDOG).

Filed under: bullshit, tellin' it like it is. 0 Comments posted.