Sunday, Oct 26, 2003 by Dr. David Thorpe (@Arr)
Radiohead is the sort of dopily dissonant, synth-mashing, warbling, British crap that passes for cutting edge these days. Their Internet fans are legion, their pretentious and egotistically dull albums continue to sell, and the people who malign the good name of critics by calling themselves as much incessantly drool over Radiohead like they've got platinum bars shooting out of their jocks. 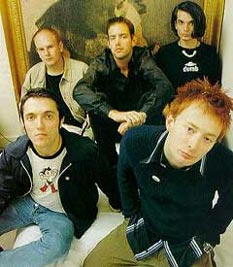 A strong argument for pouring mercury into your ear canal.We all have a favorite band. I won't tell you what mine is, because even if you'd heard of them, which you haven't, you couldn't even begin to understand them. I like my favorite band because they're great. However, you like your favorite band because the hot girl at the record store likes them. You like them because that cool friend of yours with the black-framed glasses and the emotionally damaged girl on his arm. Who knows, maybe you’re pathetic enough to like them because the goddamned Internet likes them.

What I'm getting at is this: the basic problem of rock fans is that they're a bunch of lazy tin-eared babies who would gladly gobble up whatever some circle-jerking hype-rag like Spin or Rolling Stone tells them to like (or worse yet, maybe they take the advice of Pitchfork Media, if they fancy themselves hipsters or are too cheap to buy magazines). No argument can be made that people like such awful bands “because they’re good,” because it’s plain to anyone with even the most stunted vestige of a brain that they’re not. I have neither the time not inclination to hold your bratty little hands and teach you how to appreciate music. Instead, I think I'll just explain to you exactly why these bands you claim to like are entirely without merit.

Why should you listen to me? Because I’m a goddamned scientist. You don’t just barge into NASA and start pushing buttons and turning dials all higgledy-piggledy, forming your own little opinions about how physics works, do you? No, you let the well-educated science guys do it, because you know jack shit about it; your only hope is to LISTEN and LEARN. I’m not condescending to you. I’m smarter than you. There’s a difference. 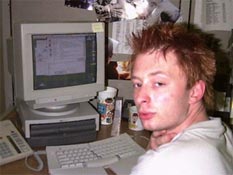 The lazy-eyed gnome uses a Macintosh. How delightfully insipid.I think I'll start with Radiohead, perpetual media darlings and so-called "greatest rock band in the world." You’d have to be blind or illiterate not to notice that the Internet is crawling with poor misguided slobs who have been somehow duped into thinking that these guys don't suck. Luckily, I’m here to dispel that myth. They suck. They suck like the wind.

What it boils down to is this: with Radiohead, it's all about proving something. Apparently Thom Yorke has something akin to Small Man Syndrome, except in his case it's more like Small Incredibly Fucking Creepy Disfigured Gnome Syndrome. First of all, he had to prove that an ethereal fetus-fairy with an heroically obtuse haircut could make it onto the pop-charts. He did so, of course, with "Creep," a song so affectingly pathetic that it could make even someone as nerdy as you feel like you had someone to laugh at. It found a substantial audience among teenage girls who needed someone to feel sorry for, teenage boys who wanted to nail said teenage girls (or who were captivated by those exiting two seconds before the chorus where it sounds like Johnny Greenwood drops his guitar), and denim-jacketed indie-loving radio DJs who are always in search of the "Next Bleak Thing." As for the album that spawned this single, “Pablo Honey,” let’s just say that even with the current Radiohead craze in full effect, no revisionist guitar-band historians have dared to step up and claim that it was any good. It’s best to just pretend it didn’t exist.

Even with a perfectly respectable one-hit wonder, the newt-faced boy and his merry band of twiddlers weren't content. They had to furrow their pale brows and set about making an album that would captivate the critics (or at least one that would have more than one song that anyone would remember in 5 years). What they eventually shat out (directly into the mouths of those critics) was The Bends, which gained popularity for such songs as "Fake Plastic Trees," which was presumably some sort of ham-fisted attempt to convey a message about the angst of the modern world. Luckily, the business-savvy boys of Radiohead kept it vague enough that even the most vapid black-haired hipster twat could project some sort of rudimentary vestige of meaning onto it. Their record label paid the requisite $50 bribe to the slack-jawed heroin addicts at New Musical Express for a good review. While I’m not currently in a masochistic enough mood to look up the reviews, they undoubtedly proclaimed it "staggeringly mature" or perhaps "a bold proclamation of artistic intent; impossible to ignore." Radiohead had their critical success, the British music press had a fresh armful of junk, and everyone was happy.

For their next trick of mass public deception, Radiohead decided to embark on a cosmic journey into the center of Neo-Pink-Floydian masturbatory pretension with OK Computer, the first in a series of Radiohead concept albums entirely lacking in concepts. They once again took MTV and modern rock radio by storm, this time with a long and tedious single called Paranoid Android. It was basically Bohemian Rhapsody by Queen, weirded up about 80% and without the element of irony that made it at least bearable as something to smirk at. It featured an adorable video (which was seemingly animated with Mario Paint) in which, appropriately, a pale and skinny man engaged in entirely meaningless and surreal exploits. The song was typical of the album; it was a tale told by five idiots, full of sound and fury but signifying nothing. Their prog-rock gambit was successful; rather than being cornered into admitting that they were too stupid to understand the album, fans and music journalists instead just assumed it had some sort of deep and profound meaning, and showered it with simpering praise that still reverberates today on a thousand Internet nerd colonies. A million brainwashed converts were left yearning for more Radiohead like lambkins for the teat.

More of this, please!What followed was an extended break in which Radiohead decided to entirely forget about the concepts of melody and even-remotely-not-sucking. This time they set about to prove that they could not only release an album which was entirely and undeniably without any merit whatsoever and still sell a shitload of copies, but that they could actually do it twice in one year. Kid A and Amnesiac replaced the inarticulate poetry and weird-for-the-sake-of-weird musicianship of OK Computer with a brand of synthesized rambling usually associated with the crazy, bearded, compulsively-masturbating auteurs of “IDM,” which is an imaginary sub-genre of electronic music (the "I" stands for "Intelligent" which stands for "pretentious and meaningless"). One would think that such wild-eyed, obstreperous garbage would have no choice but to be interesting, but Radiohead once again defied expectations by making the albums as boring as a tea-party with grandma. Not even your own grandma, with whom you had an emotional connection. This was like a tea party with your neighbor’s grandma. The decidedly lukewarm reaction from the music press only added to the die-hard fans’ mistaken impression that these albums were deep and mysterious.

Their next move, to their credit, was a shrewd one. They were well aware that even their most glassy-eyed followers were itching for some kind of a return to form. The fans found it hard to articulate what exactly they were missing when they listened to Kid A and Amnesiac; what it was, of course, was the fact that all the tunes had been cleverly removed. Radiohead had made two albums that superficially resembled music but really weren't music at all. So, in order to drum up public interest in their next album, they made the outlandish claim it would contain actual tunes and, if we were lucky, perhaps guitar playing which conformed to some sort of pattern. The carrot at the end of this stick was kept tantalizingly out of reach, of course. "Hail to the Thief" (a title which they bought off of Don Henley for a copy of Stupid White Men and a new cardboard box) was released this year directly into the cable modems of a million greasy social deviants who loved it almost enough to buy it. The album contains, when we're lucky, primitive, one-celled predecessors of tunes that with a few million years of evolution might be able to fill up a 5 second cell phone ringtone. They’ve given you just enough of what you want that you’ll buy their next record, but luckily for them they’ve set the delightful precedent that they can sell just as many records without having to write any actual songs.

Radiohead, the kings nerdy, boring, tuneless rock music, are on top of the world. They’ve proven time and time again that they can piss directly into your open mouths, and you’ll frolic and gargle in the yellow stream like God himself was giving you a nectar-bath. Loathsome pseudo-intellectual college boys used to have ponytails; now they have Radiohead. God help you, you stupid, gullible infants.

I hope you’ve found this educational. The first step toward recovery is to break down the misguided opinions that the music press has formed for you. You can’t be truly free until you can look at what was once your favorite band and say, “everything they’ve ever done has been utter shit.” Hopefully I’ll be able to lovingly guide you through this process, and gently persuade you about many other bands in a similar fashion. You might tell me “David, there is no possible way you could dislike (insert name of terrible band you stupidly think is good). They are geniuses.” Oh, but I can, and I do. I look forward to the opportunity to shit upon all that you hold sacred, because it’s the only way you’ll ever learn, you media-addled philistines. Feel free to never under any circumstances e-mail me and share your mentally stunted ramblings. Better yet, feel free to just weep in your goddamned Livejournal about it instead.

More Your Band Sucks Next