Wednesday, Dec 21, 2005 by Caylen "Abraham" Burroughs
If there's one thing hardcore MMO players and junior high school English teachers can agree on, it's this - you can't spell Warcraft without "war". In WoW, war is expressed primarily through PvP - Player vs. Player combat. The conflict in Warcraft has evolved from clumsy ground units hapazardly chopping down entire farms with their tiny swords into its current incarnation of clumsy 15-year olds haphazardly chopping one another down with their large glowy swords. Battlegrounds are what make this possible. 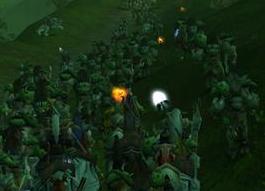 The alpha test screenshots of the Feralas Battleground look promising.

Does anyone even remember Player Versus Player in World of Warcraft before the Battlegrounds were introduced? Back in the good ole days, where there was no reason to kill a member of the opposing side, when there was no incentive to killing an Orc or Human except for being a jerk. The entire purpose of playing on a Player versus Player server isn’t to be nice and friendly to the opposing side – you create a character there because you want to be a jerk.

For some reason, Blizzard felt that being a jerk was not a reward in and of itself, and it required more of an incentive, as well as competitive arenas for jerks to be jerks to other jerks. In fact, a ranking system was devised so people could establish who the jerk di tutti jerk was. This was a mistake on Blizzard's behalf, because the target audience for PvP is jerks, and jerks complain about anything that’s given to them. It was a nice gesture however.

Before Battlegrounds were introduced as a revolutionary way to be an asshole for $14.95 a month, PvP took place mostly in Hillsbrad Foothills, also known as the Clusterfuck of Latency that was responsible of making the world server crash every hour. Want to become one of the highest ranked players on your server? Then you could take part in the Macy’s Day Parade of jerks who are endlessly dying and respawning into each other; mashing keys in the hopes of being realized as the High Champion of Orgrimmar, or the Grand Master Flash of Stormwind. They would become praised for their abilities to demolish players who temporarily disconnected, or their prowess for spamming Area of Effect damage effects for 16 hours a day. Still, players clamored for an arena to test their skills collectively. Something like Counterstrike, only with Warriors, Mages and far more retards who can’t type claiming that other players were cheating.

So Blizzard released Battlegrounds, an innovative new way for players to complain about class balance, server latency, and how much the their own and opposing races suck. Soon every player who enjoyed pissing people off logged into their Paladins and Shamans to wait in line for these contests of skill. Now, at any time of the day can be you can utterly annihilated in combat, and tediously grind faction at the same time. Yet, I for one can’t complain for an opportunity to claim that I am in fact better than someone else at a video game.

Let’s briefly overview the three Battlegrounds, shall we? 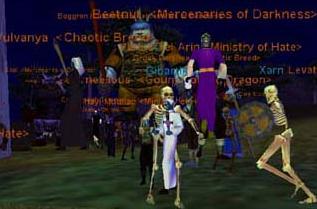 Not Featured in Picture: Cohesion, a Basic Understanding of Strategy

Warsong Gulch: The industrial juggernaut known as the Warsong Outriders has begun its mass deforestation of Ashenvale. Standing in their way are the soldiers of the Silverwing Outpost, a stalwart detachment of Night Elves pledged to preserve their ancestral homeland at any cost. It's with much bloodshed that these two armies vie to attain the means to the end of their conflict - the capture and retrieval of the enemy's flag. Not once, not twice...but three times!

Some critics immediately panned Blizzard for catering to the first-person shooter crowd with a glorified "CTF mod" for their game, but the role-play rationale is clear. It can only be assumed that after months of intense, unending combat, the Generals of both armies decided that the age-old conflict between industrial advancement and the preservation of one's natural environment could only be settled by stealing a 5-foot tall stick with a bit of cloth on the end of it.

Blizzard's choice in resolving this fictional conflict is no doubt a reference to a well-known, real world legal battle that was litigated for years with no end in sight. Only the intervention of the Supreme Court of the United States could put the issue to rest. The landmark and controversial case of Razordyne Industries v. Shonash Wildlife Preserve (1982) was settled by a 6-3 vote in favor of a precedent-setting mandate that the senior management of both organizations would compete in a no-holds-barred game of Capture the Flag, held in the very Wisconsin wilderness under dispute. In the end, seven top-level executives lost their lives, but the forest was to remain unspoiled, and a new chapter in this country's legal history was written. But I digress.

The main weakness of this BG is the inherent advantage some classes have over others (snare and root spells, speed enhancements, and the like), not to mention the difference that specialized consumable items, both crafted and farmed, can make in deciding an individual game. It's now rumored that patch 1.9 will feature a new enhancement for the Druid class - drinking a Free Action Potion, shifting to Travel Form and grabbing the enemy flag will immediately trigger the invincibility music from the original Mario Brothers game for all to hear. Now, some may claim that teamwork is essential for a successful flag run, but since when was playing in a cohesive group a part of this game? The only way you can be sure that the flag is going to get home safe isn’t by escorting the carrier back, using a proactive assortment of snares, heals and crowd control. Instead, treat it like a sort of morbid relay race: let him die, grab it yourself, and let your teammates serve as future obstacles to the wall of five players who wish to see you as a ghost. Don’t worry about your own flag – the bad guys will be too occupied defending your occasional quick visits to their flagpole, back to your graveyard.

Alterac Valley: It's here in the sprawling, snow-covered landscape of the Alterac Mountains that a detachment of orcs, the Frostwolf Clan (named accordingly because they have a bunch of wolves and are fucking COLD), have fortified themselves against the incursion of Vaandar Stormpike and his band of Dwarven explorers. While both sides possess a formidable home base, numerous towers and bunkers, and a cadre of commanders and lieutenants stationed at various choke points across the map, it falls to you and your fellow adventurers to bravely go forth and play cannon fodder for your General, as he idly sits at the rear of your outpost, drinking cocoa and hoping that the opposing army gets bored/frustrated enough to /AFK out of the instance before his does. Picture the ultra-violent trench warfare that occurred in the 1930s, only with less organization, more needless casualties and no actual trenches. 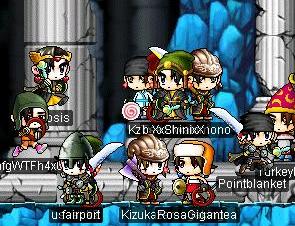 Wide open terrain makes way for massive, pitched battles, where crazed melee classes charge headlong into the enemy's front lines as their healers toss them the occasional Renew in between their own nukes and dots. Meanwhile, the rest of the army does the hokey pokey in and out of spell ranges until one hapless fool steps a little too far out and is promptly gibbed by a dozen ranged attacks. AV combines strategy of large-scale infantry combat, with the trepidation and potential embarrassment of a game of dodge ball - except the ostracized fat kid is completely dominating with the mage he plays 40 hours a week.

To make matters more meddlesome, you get to also compete with the twenty people next to you in looting the corpses of the opposition. The cadavers can contain fabulous prizes that include up to 2 silver, 3 reputation points and trash loot so terrible, they cannot be sold. Also of note is Korrak the Bloodrager, aka The Pain Train. Instead of killing Korrak, players are often best served to train the ugly thug into the huddled mass of antagonists, then following in the body-strewn carpeting he laid out for you. Later, while pinning the opponent in their base towards the final minutes of the match, the soon-to-be champions can easily slay the boss for fantastic loot that almost always ends up ninja’d. This is known as “Korrak-Blocking.”

Progress, as it were, is dictated by one force bulldozing the other all the way back to their fortress, where after a few hours of the attacking zerg eating an endless supply of NPC-fired arrows, a rogue-druid team on the other side captures a graveyard 37 miles behind the main fighting and starts the process all over again. There are a number of secondary objectives for those who abhor the main fight - burning down buildings, stealing artifacts, robbing indigenous creatures of their natural resources - you know, the fun side of war. The "Drop White Phosphorous on the Horde Orphan Asylum" side quest was removed just prior to AV going live – but you can still go kill rams for no reason if you get bored with the mundane slaughterhouse that your team is facing.

The best strategy for Alterac Valley is the one of farming – the NPC soldiers, harpies, gnolls and generals are all easily soloed, have fantastic reputation per kill, decent loot tables, and chances are you won’t die as much. You will still get the entire honor your side was going to get for losing this hour, and who knows? You might even get the chance to kill a player who is trying to attack some wolves on the outskirts. For AV, it’s not about watching the scoreboard; it’s about looking out for #1.