The Exciting World of Gameboy Music

There are many uses for the classic Gameboy. When on the move, it can be used to play a wide variety of fun games. There was also a terrible camera/printer released for it. For many years, that was all you had. Now, there's a new reason to own the huge grey handheld. Forum goon Giant Robot Fight! has been working hard recently to record music using Nintendo's original Gameboy. Taking requests from fellow members of the Awful Forums, Giant Robot Fight! has given us just a glimpse as his talents by offering some samples of his work. Enjoy the following MP3s in an authentic fashion by screwing your eyes as you attempt to see the screen with no backlight, and try to resist the urge to throw the console out of frustration when you batteries die on the last level. 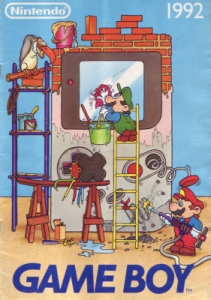 This is what Giant Robot Fight! had to say:

I have a Gameboy classic (a.k.a. the grey brick) and software to write music on it. I'm in the process of learning how to use it, so I'm writing music (well, covering other people's songs) on it to get used to it and get myself up to speed. Here are the tracks I have finished so far:

Michael Jackson - Beat It (Right click and Save As)

Harold Faltermeyer - Axel F. The Crazy Frog! Don't worry, this version is much better. (Right click and Save As)