Wednesday, Apr 07, 2010 by Andrew "Garbage Day" Miller
Know of an awful site? Send it to us and become a hero!

That sounds classy enough, I suppose. And the logo, with the vintage typewriter and the nom de plume with "Fiction" right there in the name, says "real writer." What's this? There seems to be some sort of key to exploring the archive:

OK, I guess I'll go right to the stories with the most letters following their titles. Maybe I'll add a few letters of my own.

"The Octopus King is my guest," Poseidon said, his voice stiff and abrupt. "You will do whatever he asks of you; I wish for him to be pleased."


"Simon the Magician," BFMRY, THE

Simon wiggled it back and forth a little for good measure, just to torment the rabbit, and was pleased to see the body beneath him writhe at the sensation. Satisfied, Simon murmured, "lubricus," and drew out the wand.

The boy closed his eyes, humiliation seeping into his every pore like a thick syrup as he felt the dog thrust wildly into his anus. 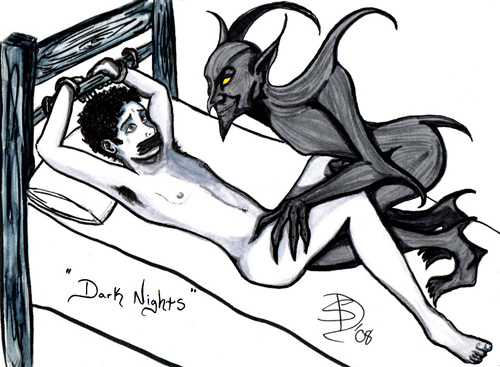 A winning Fanart Gallery entry, from the artist 'TwilightSpeaks.'