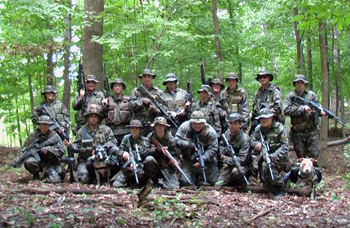 Last month, the FBI detained several members of a Christian militia called the "Hutaree" on suspicion that they were planning to murder law enforcement officers, then massacre the attendees at the officers' funerals. Some people might think "I don't remember Jesus being that big on murder," and they might even recall an incident in which a disciple sliced off an arresting official's ear, only to have Jesus heal the ear and say "put your sword back in its place, for all who take the sword will perish by the sword." But clearly they remembered wrong, as the Hutaree reminds us:

Jesus wanted us to be ready to defend ourselves using the sword and stay alive using equipment.

Interested in "using equipment" against enemies of Christ, like cops or government officials who might try to give you health insurance? Also, do you like shooting guns while standing next to beat-up cars? If so, this recruitment video will really speak to you! It's inexplicably set to "weird 80's music from Germany" (actually "Marian," by the UK band Sisters of Mercy), which makes for an enjoyable listen, if you can set aside the fact that it's soundtracking the pseudo-military training activities of heavily armed Midwestern lunatics who are "preparing for the end time battles."