Robert "Macrame_God" Seeders was institutionalized and forced to watch Martin Scorsese's Shutter Island on a continuous loop. Mercifully, he was released after only one viewing on the grounds that "it was all a big misunderstanding," which means he was able to bring you this review instead of having to take more sleepy pills.

EXPECTATIONS: Shutter Island is the fourth film on which Martin Scorsese and Leonardo DiCaprio have collaborated in the past eight years (are these guys an item or something?), and this has proven to be a winning combination in the past. However, the fact that this is coming out in the middle of February (after a stay on the shelf) as opposed to Oscar season has me worried this will be more like Gangs of New York and less like The Departed. 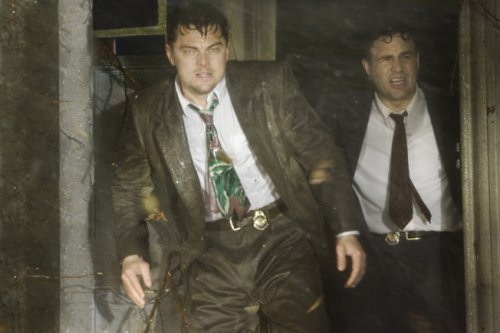 Grr! I'm so angry about rain!

REALITY: Shutter Island stars Leonardo DiCaprio as Teddy Daniels, a US Marshal (OR IS HE?) who is assigned to investigate the mysterious disappearance of a deranged inmate (OR IS SHE?) from Ashecliffe Hospital, a seemingly inescapable asylum for the criminally insane (OR IS IT?) in Massachusetts circa 1954. However, not long into his investigation, Daniels comes to suspect that the patient's vanishing act might be linked to a bizarre conspiracy involving the true, sinister nature of the asylum and its staff. What unfolds is a haunting and methodical mystery that not only brings into question the true nature of Ashecliffe but also Teddy Daniels' own ability to distinguish between what is reality and what is the product of his growing paranoia. 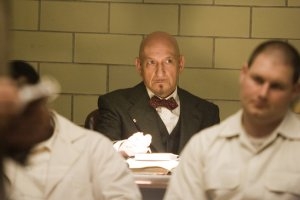 Ben Kingsley is eager to hear advances on the investigation into his missing neck.Even though DiCaprio gets top billing, it's pretty clear that Scorsese himself is the star of Shutter Island. The film is easily one of his most stylish yet, sporting great sets, gorgeous cinematography and some nice special effects. This isn't to say that the actors don't deserve credit for their performances, quite the contrary; it's the cast that really pulls Shutter Island together, and I do mean the entire cast. Mark Ruffalo does good work as Chuck Aule, Daniels' recently appointed partner for the case, and Ben Kingsley knocks it out the park as Dr. Cawley, Ashecliffe's shady chief physician. Michelle Williams and Jackie Earle Haley also deliver as Daniels' deceased wife and troubled source, respectively. Even Ted Levine gets his moment in the spotlight with a chilling, though ultimately pointless, monologue about violence being God's gift to man. The inmates, many of whom never get so much as a line in the film, fill the picture with color and atmosphere. A brief shot of a decrepit old woman with a large scar across her throat does more to set the tone of the picture in only a few seconds than some films struggle to do with their entire running time. If creepy stand-ins and secondary characters could be considered props, then Shutter Island is like a tour of the Hollywood warehouse where they're all kept. 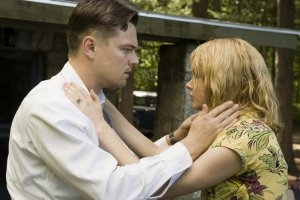 Leo becomes increasingly convinced that these frequent games of slaps are to blame for his failing marriage.At 138 minutes, Shutter Island is actually one of Scorsese's shortest films in recent history. Daniels' quest to unravel the asylum's secrets is well-paced and great to watch, with his eventual struggle to maintain his grip on reality proving equally fascinating. However, by the time we get to the big reveal, I was almost convinced that I was watching the most elaborate episode of Punk'd ever produced, because the way it was all explained is almost laughable. Furthermore, the film's score, while well suited for the picture, is incredibly interruptive and is played at such boisterously loud and threatening volumes that I was starting to suspect that it was going to be one of the villains. Also, and I know I'm going to sound like a whiny little bitch about this, but there was a conversation between Daniels and one of the asylum patients that was impossible to watch because it took place over an annoyingly flickering and crackling campfire, which served only to distract me from the dialogue. Maybe most people can tolerate that sort of thing, but it felt like I was watching the movie while someone waved a flashlight in my face.

Shutter Island isn't one of Scorsese's very best pictures, but it's a quality thriller that supports some A-list acting and loads of cinematic style. The story is a bit too cluttered for its own good, the music is jarring, the twist is predictable and I was a little irked about the overriding message, but Shutter Island isn't so much about the destination as it is about the journey. And that journey was suspenseful enough to make this the best movie I've seen so far in 2010.

Yeah, it is, actually.

MINORITY REPORT: It has been some time since my unfortunate incarceration in a mental health facility and this film bears little to no resemblance to my own experience. I remember rainbows and scarecrows battling over raging volcanic calderas for the trifling reward of a few pork scratchings. All the while the shadow grows darker and reaches farther and farther into the valley, looming over the innocent children as they play their little games... and the shadow is MEEEEEEEEEEEEE! With dark, uncaring claws, I reach out to the souls of all who fall beneath my gaze. Unknowingly, they have given themselves over to a new, evil ruler, and as they pass through the darkness into the unending doom of the flames of hell, I will laugh! LAUGH! Laugh, because even now they are not aware of their fates! To summarize: I can't remember what I was talking about and now it's time for me to take my medicine. -Montague "Legally Sane" Smythe