We've got a couple of interesting films on the roster today. To start with, we have Holy Motors, which gave Martin R. "Vargo" Schneider a lot - maybe too much - to think about. Then we have The Imposter, a documentary that left quite an impression on Joseph "Jay Dub" Wade. Finally, we have a special seasonal treat for you: The official Current Releases Christmas Gift Guide!

EXPECTATIONS: None, really. The internet told me to go in blind, so I am. I do know that people are praising this film for being creative and bizarre, but those are phrases that are tossed around so much that they're essentially meaningless. Consider this: Twin Peaks can be considered "creative and bizarre," but so can Monkeybone. It's hardly a guarantee of quality, is what I'm saying here.

REALITY: I've never been a fan of the idea that something is funny or satirical because it's awkward and weird, Tim and Eric style. It's not that it's just "weird for the sake of being weird," which is ridiculous criticism anyway. The truth is, very rarely are filmmakers ever "just being weird," there's always a point behind it. But sometimes you can be in on the joke and still not find it funny. This is how I feel about Holy Motors. 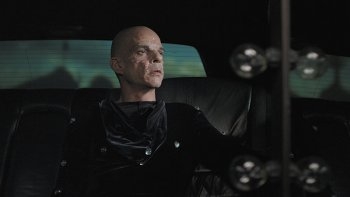 Dune?I'm going to try to explain the plot of Holy Motors to you now, and I am going to do the film and myself a great disservice by doing so. Holy Motors follows a man known as Mr. Oscar (Denis Levant) as he is driven from appointment to appointment by his chauffeur Celine (Edith Scob). Mr Oscar's job, apparently, is to jump into people's lives, becoming different people in different scenarios using props and makeup. At one point, he is an old homeless woman; at another he is a concerned father who is kind of a dick; and in another appointment he reprises a role Levant played for a different film by director Leos Carax, which I can only describe as some kind of "rape leprechaun." The scenes have nothing to do with each other, and are only connected by little in-between bits of Oscar and Celine driving in the limo.


Holy Motors is a highly experimental film that plays around with what the audience expects from cinema, often altering those expectations mid-scene. You think "Oh, he's on a boat, no wait it's a motel room that just has a boat near it." Mr. Oscar acts like a person getting in a car, only to walk right past it and make you wonder why you ever thought he was going to get in it in the first place. My favorite shot happens early on, where an image of a girl looking out a window is superimposed under an image of the girl looking out the window at a slightly different angle. As the camera pans out, the two images become one, and the brain says that the girl has been looking out angle #2 the entire time. Maybe she was, and I made the whole thing up. It's that kind of film. 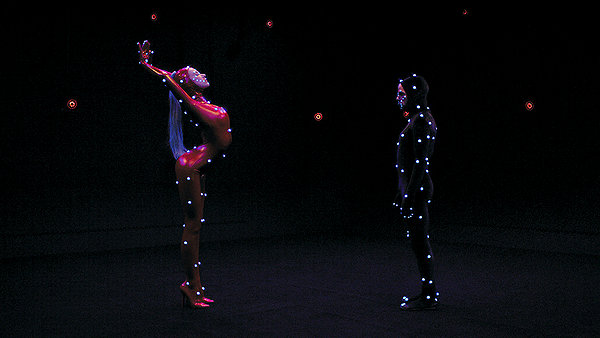 I really enjoyed all of these experimental touches, because I like ideas that challenge me as an audience member. Why, then, didn't I like Holy Motors as a whole? I think it's because I came up with a perfectly rational theory behind the film and that left the whole experience kind of flat. Because I am a party-pooper and life-ruiner, I will impart this theory to you now: Holy Motors is a commentary on the act of making film itself. Levant is a character actor playing an actor who plays a bunch of characters. If this were an American film, it would be, I don't know, Gary Oldman directed by Spike Jonze. The whole thing is very meta. It's a series of short vignettes in different genres that follow familiar tropes. Their disconnect is the point of the film, to see how the audience is trained to recognize various preconceived concepts and notions. In fact, the movie is super-straightforward about this. Evidence: The main character is named Oscar. 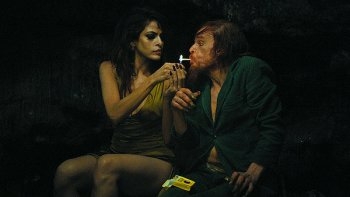 Ghost Rider?What this means, then, is that we have a bunch of shorts that are basically the theory of relativity in action: The scenes I enjoyed went by too quickly, and the scenes I didn't seemed to drag on forever. The movie had already told me "Hey, don't bother trying to figure this scene out," and yet I did anyway. Once I had settled on the point of the movie, I was left with a collection of scenes that, for the most part, aren't particularly interesting. Had I finally done what my father tells me I do and ruined a movie by overthinking it? I don't think so, because if I hadn't, I would have just been confused and still disliked the film. Take that, Dad!

There are moments where Holy Motors really hits, including a fantastic interlude where Levant rocks out on an accordion. However, there are also moments like an intentionally (?) terrible dramatic musical from Kylie Minogue. It's completely incohesive, and normally I'd deduct points for that, but here it's the entire point.


Holy Motors is one of those rare and frustrating films where I can recognize that it is good, but I personally have little interest in it. I realize that this makes this column basically useless as criticism, but this is a film that defies being criticized. It's impossible to watch it without thinking about it, and thinking about it too much ruins what little fun there is. There's also the distinct possibility that my theory is completely wrong, too, and I ruined a film for myself for no reason. I usually judge films on how well they accomplish what they set out to do. I'm pretty sure Leos Carax set out to break me, and by that standard, I should give him a perfect score. But forget that; if he gets to cheat, so do I.

MINORITY REPORT: E=MC². Where E is Holy Motors, M is Marty's preconceived notions of how films are supposed to work, and C is whatever Leos Carax was smoking to the power of two. Would a math person care to double-check my work on that one? We need to figure out this film with science before the interpretations begin. - Joseph "Jay Dub" Wade