Myke's World, submitted by Richard. Scientology is scary. Clowns are far worse. This site is all about a man who is half serious musician...and half TERRIFYING CLOWN! Let's hear some words from Myke's human half... 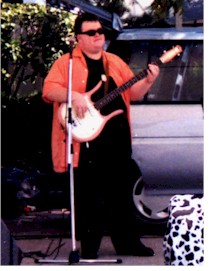 This shot shows me laying down the groove in early 1998 with Tabasco. In the beginning, Tabasco was a partnership between myself and stand-up comic and magician Rob Power. Rob is one of the most versatile and fun performers I have ever worked with. Tabasco is a band dedicated to good times and having fun. Tabasco plays the hits from the 50's to current tunes but also prides itself on its comic originals. I've since left the band due to personal and artistic differences, but Tabasco continues to play throughout the Greater Toronto Area. 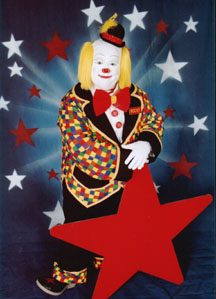 I pride myself in keeping my skills honed and fine-tuned. As such I endeavor to attend one to two educational seminars each year to both sharpen my existing skills as well as add new and interesting ideas to my performances. I have attended the following conferences and educational activities:

Don't even fucking listen to the music on this page...actually, don't even go to this page. On second thought, I realize it's too horrible to subject you to.