Tuesday, Sep 24, 2002 by Rich "Lowtax" Kyanka (@TwitterHasBannedAllMyAccountsEver)
Know of an awful site? Send it to us and become a hero!

QUEER VAMPIRES!!!, submitted by The Phony Pope. Okay, so you're a gay man who enjoys the accompaniment of other gay men. That is understandable. However, these gay men seem to be attracted to gay men who have the power to morph into VAMPIRE GAY MEN! That's right, they suck your dick and then your neck, perhaps not in that particular order! 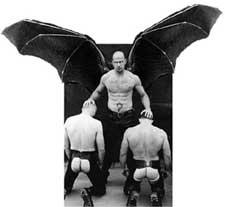 Culturally, the fact that so many sexual videos are made about vampires does show that the two are associated in people's conscious or subconscious minds. Whether they're associated with sex, sex and death, sex and domination or other variants, there's no getting around the sexual side of them. But even with the number of videos out today, there's still so much area left to explore. Here's hoping that an Incubus and a Gayal get it on while a Chupacabra watches!

WOW YEAH! What a fucking great idea! Let's all have sex with a demon spirit and a "Gayal" (which I assume means a gay person named "Al) while the Mexican goat-sucker Chupacabra stares in and plans which vital organs of ours to remove! How sexy! Thank you very much, Internet, for exposing me to fetishes which probably should've been dead and buried after John Ashcroft's Christian Secret Service Agents went into action and purged this world of all horrible humans.