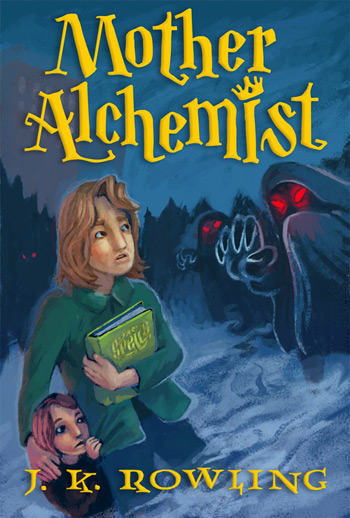 Expectato Ascendum! British children's author J.K. Rowling has announced some details on her new soon-to-be bestselling novel, titled Mother Alchemist. Rowling's new novel is both familiar and strange, focusing on a middle aged woman named Joy Killeen, who has discovered "alchemical magic," the main fantasy element of this series. The plot still centers around children, but in being told from the perspective of a sad, aging woman, the novel has a gravitas not found in her previous work. In a recent interview, Rowling explained the premise:

"Right. Imagine being a bloke what stumbled on something smashing that no one has ever seen before. What you found is so brilliant that it becomes this big deal. That's what [Joy Killeen] faces in Mother Alchemist. She discovers, or rather, invents Alchemical Magic and she's like, oh, this is a bit weird, innit? At first she's just using it to cheer up her daughter, right, but then it becomes this big thing that makes her famous and the whole world wants a piece of it. 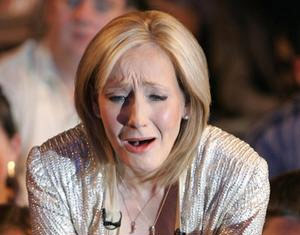 It's like she's getting phoned all the time and is always on the telly, right? She's got mates who support her and look at what she's made and say, right, brilliant. But then there's also some knobs that want to nick her invention, you know, and get rich on it, but they don't have proper respect for the magic, so it goes to pot when they touch it. Because they are rubbish. They turn into vampires, which I hate, because they live off of others, you know. Parasites. Scum. Thieving bastard scum. Lying, thieving, bastard scum. They couldn't invent a magic by themselves with a bloody rabbit in a cap stuffed up their arse."

The plot may sound convoluted and implausible at first, but as she proved in the immensely successful Harry Potter series, Rowling is an expert at taking inexplicably complicated plot lines and writing them out with the simplicity of a child. Mother Alchemist is no exception. Rowling combines fantasy, recognizable characters, and magic to pull the reader into a world so simple and childlike they won't want to return to reality.

This excerpt from early in the novel showcases Rowling's dexterity with the pen. In this scene Joy is realizing that discovering the amazing gift of Alchemical Magic may not have been so great after all.

Joy removed her Alchemichum Magellical spellbook from its case and angrily placed it on the table before her in a huff. The cracked paper rustled and folded beneath the heavy leather binding. Engraved on the cover were the strange and marvelous symbols that represented the mysterious magical powers within.

"These vampires want to steal the alchemical formula that I worked so hard developing. They want to spread their inferior version of it, their rot, across the world. Everyday there are more and more teens turning to vampires. They think it's sexy and cool and that they are being unique and rebellious but it's just rubbish, Lily, utter and complete tripe," she said to her daughter who sat across the room from her.

Joy gripped the book tightly as if to hug it, then let it fall to the table. Lily looked up sharply.

"I was saying, Lily, it isn't easy being a great mom by itself, which you know I have always been, but then to deal with this too? I thought I was giving a gift to the world. I wanted my work to make everyone as happy as it made you."

Lily opened her mouth to speak, but Joy continued, "Oh Lily... maybe it would have been best if I had never brought this magic into the world. It has brought me fame and fortune. I'm one of the richest people in the world, and everyone has heard of my magic, if not experienced it themselves. But I fear for the future. I fear for your future. You're thirteen, Lily, and that's the age when many of these kids are turning to the vampires instead of their parents, instead of my magic. Magic should be pure and good, just like people. I fear this may be the twilight of that purity. A new moon is rising in the sky, a moon of filthy, repulsive thieves who want to eclipse the light of Alchemical Magic with their phony makeshift copies. I can only hope that soon a breaking dawn will come and release these children from the hands of the vampires that they follow so foolishly into the darkness."

Lily looked across the table at her with the frustrated expression of childhood incomprehension. "It made me happy when you showed me, mum. Now it's making you sad."

Joy closed her eyes, nodded sagaciously, and marveled at the insight of the young.

Rowling seems to have matured in this novel. Whereas Harry Potter had a lighter tone, there seems to be a real anger fueling her writing, as if Rowling herself was caught up in her protagonist's struggle against the vampires for control of the minds of the children of the world. Her fluent prose runs across the page with a frightening alacrity. The ease of reading Rowling's work can be misleading; there are plenty of places, people and magic spells with strange names that keep the reader fully immersed. When the mother uses magic, alchemically, she calls forth creatures from all sorts of myths and fairy tales that the keen reader will appreciate and recognize. Rowling isn't afraid to utilize a well-known, almost cliché fantasy creature and transform it into a denizen of her own fantasy world. The real alchemy in Rowling's novel is her ability to take a staple of mythology and transmute it, in her mind, into her own original invention.