Ghosts of Jan's Courtyard, submitted by En. I love a good, scary ghost story. That's why I really, really hate this site. The first page is like a cargo plane carrying crappy clip art crashed into a warehouse full of bad poetry, which happened to be about the clipart. And then some jackass with a keyboard came by and decided to play a horrible"spooky" midi in an endless loop of hatred. You get to see two lines of poetry, then some godawful art, then another two lines of poetry, followed by more godawful art, and so on and so forth for far too long. After three days go by and the page loads in its entirety, you can check out the pages of ghost stories. Each one is about ten sentences long, and chock full of poor grammar and punctuation. For your reading pleasure, they are also as far from scary as is humanly possible, as demonstrated by the masterpiece below: 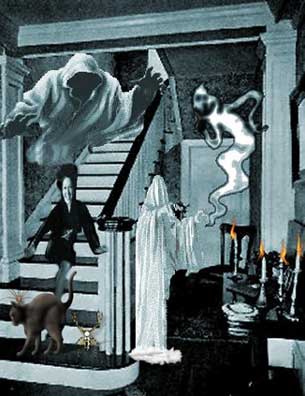 One Halloween night, in 1932, Heather and Ashley were walking through a graveyard trying to find their Aunt Anna's tombstone.

After about a minute of walking, Ashley stopped for a rest. Then all of a sudden, a bloody hand came out of the ground and grabbed her ankle, so it tripped her.

Then Heather finally heard Ashley's screaming and ran to save her. Once Heather got there, Ashley was already in the ground. Heather ran as fast as she could to get help.

Once she got her parents to the graveyard, all that was left of Ashley was a shoelace. The next year Heather went back to the graveyard with her best friend, Melissa, to see if they could see either Ashley or their Aunt Anna. Melissa sat down on the ground next to Heather on the same exact same spot as Ashley sat on.

Melissa was becoming quite restless and started looking into the trees. Heather started staring into the trees just like Ashley did the night Ashley disappeared. She didn't notice that Melissa started to walk away, but once she noticed, she started to run to catch up, but once Heather got even with her, the bloody hand that grabbed Ashley's ankle, grabbed Melissa's ankle and pulled her into the ground.

Heather ran to get help, but when she came back to get her, there was absolutely nothing left of her, except for a piece of her shirt that must have been torn off.

After about two or three months, Heather's parents brought her to a counselor to get help.

The counselor, Nancy, told her to try to go back there on Halloween with her family. That night when she was sleeping, she had a nightmare that her parents, her new best friend, Whytnie, and herself all were at the graveyard on Halloween.

That's the entire story. Pretty frightening, huh? It's hard to believe that no one has the movie rights, yet. And yes, I do believe that is anchorwoman Connie Chung in the picture. I'm too mortified by this site to come up with anything clever to say about it. Check out this site, voice your opinions in their guestbook, then curl up in the fetal position and pray that the ghosts don't get you. While you're at it, pray that everyone who in any way contributed to this site be hit by a bus full of broken glass.