Thursday, Nov 14, 2002 by Rich "Lowtax" Kyanka (@TwitterHasBannedAllMyAccountsEver)
Know of an awful site? Send it to us and become a hero!

Ars Amatoria, submitted by Ryan. When I think of The Mighty Morphin Power Rangers, I think "love is in the air." No series has so accurately captured the emotion, lust, and desire of needful human beings as The Mighty Morphin Power Rangers, and no show will ever be able to achieve the romantic rollercoaster ride that it produced. From Tanya and Shawn's undying love to Lord Zedd and Rita Repulsa's one night stand, this website delves into each and every romantic aspect of this deep, deep show. 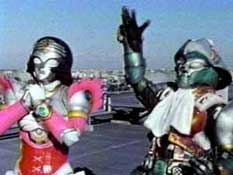 Now, this is a great romance story! Gaskett, the crowned prince and Mondo's heir, was smitten by the beauty and grace of Princess Archerina, the daughter of Mondo's greatest rival, King Aradon. Is this Romeo and Juliet, or what! The two passionate heirs chose love over family loyalty, and eloped, and we know from the show that Mondo's fury at his son's betrayal is so great, Gaskett wouldn't even show his face until Mondo vanished. The sacrifices these young Machines made in the name of love are intense. Yes, they're evil... and yes, they wanted to forge their own evil empire. But they are also capable of great love and devotion. Machines with passion... now that's a paradox.

See, when I read about Mighty Morphin Power Rangers romance, I think "now that's a paradox," not "now that's some stupid shit." This is because I am a deep, emotional, caring creature with strong roots in love and I guess dirt. Of course no stupid site would be complete without some disgusting fan fiction or an outright display that the author suffers from severe "too much time on their hands syndrome," so feel free to click and be whisked away to a world of wonder, whimsey, and, uh, whatever.

PS: There's a guestbook you're asked to sign, where I assume you can share your favorite moment of Power Ranger lovin'. My most cherished memory was of the time I turned on the television and didn't watch the show! Hubba hubba!