Snafu Comics, submitted by R-Lo. I think all of the writers here at Something Awful are huge fans of Internet Web Comics! They truly are one of the greatest things the net culture has to offer, and I enjoy reading one after another out of the thousands that exist to see how crude art can get and still make a coherent joke about hating the Xbox. Essentially all of the web comics out there that aren't based on furries are based on Penny Arcade's time tested formula of "Nintendo Rulez, Microsoft Drulez". As most imitations are, Snafu is horrifyingly worse than Penny Arcade during its darkest days. I didn't do any scientific studies, but by my rough estimate some 99.5% of the comics at Snafu are either about hating the Xbox, Nintendo being awesome, or some random shit thrown together by a guest artist in a link-whoring exchange. 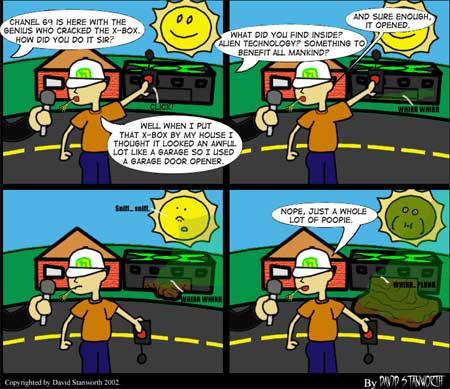 K. Rowling is my literature goddess. I was honestly to the point where reading was the most horrible thing that could happen to me. But then the Potter books came around. Finally a book that was so good I "wanted" to read it. Judging from the mountains of Harry Potter Merchandise I'm not alone in my fandom. A Harry Potter game is coming for the Nintendo Gamecube. With a movie already out, toys and sequels coming on the way I'd say there hasn't been a book this influential since the Bible. The DVD just barely came out with added scenes to the already long movie. I haven't seen them yet but I'll eventual get around to giving them a peak.

Way to go Levar Burton, I'm glad Harry Potter sent that Butterfly in the Sky flying past your face. Also featured heavily on these "high quality" comics are themes like "Blink182 rules" and "Eminem sucks", as well as hot topics in which the comics so slavishly heap love on Nintendo that I heard my monitor start making a dick sucking sound. Seriously, what is the deal with web comics and hating the Xbox? Is there some form they have to fill out to get a "shitty web comic license"? If they check "Likes Xbox," does a trap door open and drop them into a pit full of Koopa Troopas? Inquiring minds want to know!