A revelation of our apocalyptic future by seers and prophets

Wednesday, Jan 29, 2003 by Rich "Lowtax" Kyanka (@TwitterHasBannedAllMyAccountsEver)
Know of an awful site? Send it to us and become a hero! 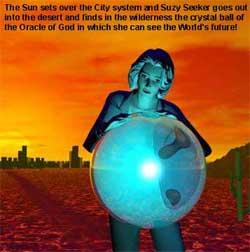 MOST LIKELY FUTURE EVENTS!
Stealthy World take over by a One World Global Government
Worldwide Crash, Economic Collapse, Famine and Great Confusion
Russian Arab alignment and threat of a 'Third Worldwar' over Israel
International Peace Treaty over Jerusalem, 3 Religions & the Middle East
Rise of a One World Parliament and a strange One World President
Rise of a New Movement of the Kingdom of the God of Love on Earth!
Rise of New Age World religion under powerful mysterious spiritual leader!
Polarisation of pro- & anti God forces by World-Media & WorldGovernment
The U.S increasingly isolated! Rise of the American Reactionary Right
Worldlings receive economic/neuro ID chip implants becoming Humanoids!
10 European powers (3 uprooted) join forces with Russia against the U.S
Christianity, Islam, Judaism & all religions of faith in God of Love outlawed!

Wait a minute, haven't crazy people been predicting all this shit for the past 20 years or so? Ah, what do I know, I wasn't even aware that humans are being branded 666, The Mark of the Devil â„¢, with microchips!

The Antichrist government will use this new credit system to try to force everybody to either worship the Antichrist or starve to death, because no one will be able to buy or sell anymore without the "mark, or the name of the Beast, or the number of his name!"--Of the Antichrist! It says that the "number of the Beast...is the number of a man!" In other words, it will probably be an international PIN- or I.D.-number, that will become obligatory! People will either be branded with it, on or under the skin as an invisible Barcode, or be injected with an injectable chip--pre-programmed with other personal information, to make a foolproof Identification system that cannot be falsified, stolen or lost!

Oh no! And to top it all off, the apocalypse is also vaguely related to reruns of "Beavis and Butthead," as shown in this wonderful animated gif from the site:

Help me, Jesus! I don't want to have my Wells Fargo checking account taken over by Satan's one-world banking system and horrible get-rich-quick schemes!