Slashing Mulder, submitted by Lain Wave. Well, the world of Slash Fiction is a perilous and troublesome one, as we all are probably well aware by now. This page takes slash one step in the right direction, however (by "right" I mean "wrong"), in that it has a lovely section entitled "challenges" wherein the site's author requests various plot elements and situations from the writers of the gay buttsex with Mulder and other X-Files characters stories. 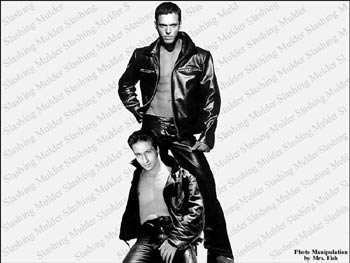 These challenges include orders to create stories such as:

Write a story with either Mulder or Skinner suffering from Bipolar or Borderline personality disorder.

and an urgent request of:

I've become totally enamored with the Coen Brothers movie, O, Brother Where Art Thou. I haven't found a reasonable way to slash the characters, and I'm not really sure I want to. So..what has this to do with a fiction challenge, you ask? Well, I'll tell you....

The song *Man of Constant Sorrow* recorded by Jordan Rivers and the Soggy Bottom Boyssimply screams Mulder. I'd like to see slash fiction involving our favorite Special Agent, with the lyrics as a basis for the story.

Could anyone out there write a epic kindof thing for me involving Krycek and the vampire Louis, from the Ann Rice novels....I don't think I want to see Krycek become immortal, but I see Louis hunting for aRat, and I see him falling into that special kinda love that vampires have for humans...... while Krycek pines for Mulder ...or something like oh yeah, and please be kind to the vampires, let them have sex, incredible sex, please =)I love most of her work especially when she writes smut!! Thank you.

If only I had some talent for writing I would get on these assignments as fast and as sweatily as I could. There is also a large page full of Mulder wallpaper and a postcard page where you can send some vaguely gay pictures of poor David Duchovny to your unsuspecting friends. There are a bunch of Mulder homosex groups for people who are into that as well. Good luck.