The Gnome Reserve, submitted by Lil' Prankster Gnome. There's only one thing I hate more than Ben "Greasnin" Platt, and that's people exploiting gnomes. This "reserve" looks more like a Nazi death camp for stupid humans to mock the imprisoned whilst snapping pictures of their snotlings with gnome hats on and buying overpriced gnome honey at 4 pounds a jar. This site makes me want to vomit my chunky cambells soup all over the place and then slip on it when I forget to clean it up. 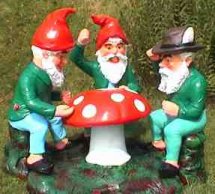 "Jeoff Smith of the National Lottery company Camelot said of the Reserve's Ottery Pool "Its a classic!"

I am so enraged right now I'm not sure what to type. Words cannot capture the pure, seething hatred that is boiling inside me right now. I want to drop napalm on this place and bayonet the survivers personally. The last time I got this angry I ended up getting soaked in pepper spray and then fell down my stairs because I thought I saw a ghost but it really turned out to be a swat team member who shot me in the face with a taser. That was the worst night ever.

"Gnome hats are loaned free of charge together with fishing rods"

Do these sick fucks think this is some kind of JOKE? Do they think they can get away with this? The retribution for their crimes against the gnome community will be swift, and the tribunal justice brutal. Such is their fate for such careless evil.