Knight Realms, submitted by forum goon.Apparently nerds have already been going outside under our very noses! Knight Realms is a role-playing adventure game based in NJ that takes the fantasy experience to the "next level". By "next level", I mean dressing up like wizards and hitting each other in the groin with foam bats. Their video libary is full of pure nerdy gems that will make you feel 100% cooler just by watching them. 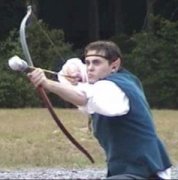 Battle in Travance!: Can somebody please tell me what's going on here? I see random elves shooting marshmallows, a black gentleman walking around suspiciously, a fatty with horns fleeing, and a lot of robed geeks standing around. If this is a battle then I'm Aunt Jemima. And I'm not. 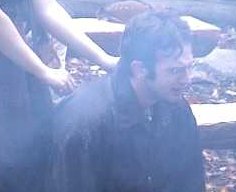 A young warrior mourns the loss of his halfling cleric friend who was felled in battle. But it turned out he was just at Burger King down the street and adventure continued.

Kellindell's Funeral: Alas and alack! Brave Kellindell hast fallen in battle! Is it just me, or does Kellindell look a lot like a 2 foot piece of wood? I didn't know that wood was a new class, but I'd imagine you'd get some bonuses against vampires or a plus 1 to gnome lore. Cry me a river you fat elf! 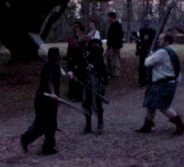 The Town battles a pair of Mezzoths: What the fuck is going on here? This is what you get when you throw a bunch of nerds together, hop them up on Mountain Dew, and tell them that Lord of the Rings sucks. This zerg rush of dorks is a result of repressed emotional trauma from thousands of school beatings. Replace the 7th grade bully with an orc and hit him with a stick of foam, problem solved. Also be sure to check out the image gallery and bestiary if you like overweight goblins. I know I do!