Everett True writes about music he likes here. Also, he writes about a very specific type of music he likes for Bust, and he's giving us the best of those bands in this week's column. Perhaps Bust will convert this mix tape into a collectible CD packaged with a future issue, so we all can have something tangible to treasure. It will be just like when that one '80s zine attached a Smiths flexidisc to its front cover. Oh. Wait. It will be nothing like that at all! -GD

OK. Listen up. What I have here for you is a virtual mix-tape, almost exclusively but not entirely made up of femme pop bands from 2010 that I've written about, first on my own blog, and later, tidied up and made attractive for American consumption, for New York's totally rad Bust magazine. I'm just stoked that there are so many fucking sweet bands around, you dig? It feels sweet and it sounds sweet and man if I was any less of a fucking male music critic than I am I'd write something corny and undeniably chauvinistic along the lines of... "And their photos all look fucking sweet, pinned to the underneath of my office desk where I can reach down easy and..." But I'm not, so I won't.

I'm just happy to be here.

I said, listen up. I know you're itching to get away and indulge in some tired masturbatory fantasy involving the day Jonny Greenwood broke his wrist fetching firewood from the great outdoors so you had to stand in at the last moment headlining Glastonbury while Rostam Batmanjingle looked on enviously from the sidelines, but fucking PAY ATTENTION. I mean, even assuming my editor's going to zip all the following files together and put them in one big Mediafire file for you to download (Editor's Note: No), it doesn't hurt to pay attention just for once.

Guessed what it is yet?

So, before we begin: Articles written as lists are a yawn, even lists written by so fine a critic as my good self. So I thought I'd intersperse descriptions of certain bands with quotes drawn from this fine blog site that I discovered via Google Alert yesterday, and a handful of random shit drawn from my PhD blog and other places. It's up to you to work out which is which. 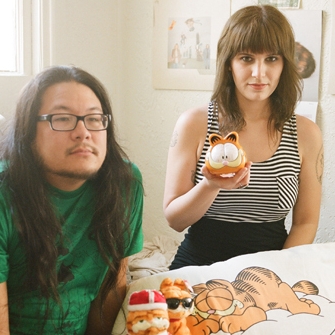 Is that you, Garfield? Have you ever been to clown town?

"Radiohead (yawn), Coldplay (triple yawn), U2 (yawning so hard it feels like the entire world is going to collapse into my mouth and I'm going to choke on the fumes). You know something? What shocks me the most is their fans' lack of imagination and the most rudimentary of research skills" - Everett True, Blind Blake vs Coldplay, 2009

Like Viv Girls with a fuzzbox. What more need to be said? This song is as laconic and crush-worthy as even She And Him's "In The Sun." And, um ... as I just said, what more needs to be said?

"Xiu Xiu's tourmates, Woom, are tremendous, right now. In fact, they're so obviously Everett True's Favourite New Band in the World, someone should tell him. Yes, the net result of their influences (or, more accurately, their raw intuition) ends up somewhere like Young Marble Giants, but it's our YMG, for the 21st century (actual influences, according to Sara: Terry Riley, Bridget Fontaine, 1970s performance art guru Jerome Rothenberg). Between them, Sara and Eben clack woodblocks, manipulate samples, and drive around massive blasts of bass the way Scout Niblett plays drums. Vocal hooks and melodic guitar lines are dropped in periodically, but more like samples than the bones of the songs. They're NOT, in any respect, 'amniotic' - they sculpt space, as in air, with sounds that are staccato, irregular, angular, never liquid. Their best 'songs' sound like the moment that ideas came together for Thriller, or 'Into the Groove(y)', the Sonic Youth version."- Alexander Tudor, Drowned In Sound

I don't hear much Young Marble Giants or Calvin Johnson. Folk always assume that because something is minimal or quiet it sounds like something else minimal or quiet. That's like assuming Iron Maiden sounds like Swans sound like Afrirampo sound like Oasis because they're loud. This is way more weird Americana than early-'80s spooked Gothic. I do hear "Into The Groove(y)," though, and a touch of Clive Pig and Miu Mau (see below), some Holly Golightly and former Careless Talk Costs Lives cover stars Young People, even. Sara's list of 'actual influences' seems spot on to me. I can imagine the dancing, the fun, the woodblocks - a sound that is not tied even vaguely to one era. I guess you could call it cute, but only because it's melodic and inventive and sweetly surreal and blissfully refreshing.

My entire life is centred around this three-minute blast of pop perfection: immaculate, heart-wrenching, the sort of pop that made you never want to give up your portable Dansette mono record-player. Anyone who ever fell in and out of love to those early Go-Go's B-sides -- or had their hand held by Jane Wiedlin -- knows what I'm talking about. 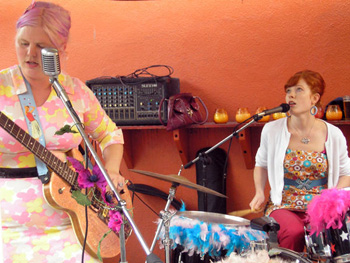 This is a picture of The Monster Women. There, you have it. Now, for the love of god, do not Google Image Search "Monster Women."

Within seconds you know they're either going to be the new Softies or the new Vivian Girls. Either way it makes music criticism redundant when a band knows its sound a thousand times better than any hapless boy hack. Ravishing.

OK. I know I'm showing up my Brisbane provincialism, but if you can name me just one cultural artifact from Buenos Aires that's more fun and exciting and fertile that this sparky trio of Devo fans, then I will parboil your first-born and fuck the remains. I have two albums of this music, and ALL OF IT is fun and beautifully concise and funny with harmonies and scratchy guitars and clattering rhythm and everything. It's probably a real good job they're destined never to tour Australia (where I live), as I would probably suffer a fatal heart attack if I saw them play live.

From Melbourne. It's The Fastbacks! It's Dolly Mixture! It's every ace local band you ever wanted to see wrapped up into one tumultuous stripped-back whole, with drums that rattle and guitars that rattle and vocals that shout blissfully into the distance. It disappoints me, the way that everything that isn't the Gories still disappoints me, but Bangs alive, that ain't hardly Super Wild Horses' fault!