Art of Vin Diesel, submitted by Mark. Vin Diesel. The name conjures different thoughts for different people. For many, that thought is, "Why the hell am I thinking about Vin Diesel?" For the denizens of this particular website, though, it's more along the lines of, "Oh shit, how do I hide my raging arousal?" The Art of Vin Diesel has everything you'd expect from a fan site - a biography, filmography, message board for discussion of his films, even some fan art - plus a whole hell of a lot more. And those extra parts are scary as all get out. For example, there is a section entitle "VinWarps," which feature absolutely wretched Photoshops of Vin Diesel as leading roles in movies that he actually had no part in. 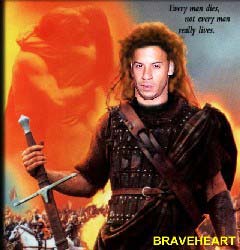 Yeah, that's an incredibly necessary piece of art if ever there was one. I actually think the saddest part about that section of the site is that the pictures are taken from another website that was shut down! There was actually another site on the internet that was run by someone who couldn't stand the thought of Vin Diesel not getting Tom Hanks' role in "Forest Gump." That's sort of depressing. This site has plenty more to offer, too. How about some fan fiction? You can never go wrong there! Like most fan fiction archives, there are plenty of erotic stories here, plus some that are just interactions between Vin Diesel and the author or fictional characters. Most of them have Diesel playing a role from one of his movies, most frequently Riddick from "Pitch Black." And if the rabid fans don't have the time, energy, or sexual creativity to come up with fan fiction, they can always indulge in some Vin Diesel role playing!

You read that right, Vin Diesel role playing. Most of them boil down to one person taking on the role of a Vin Diesel character and the other either being him/herself or another character from a movie.

Riddick watches her, wordlessly. Occasionally, he grunts with pain.

I need to wind the bandages around your leg...

I'm going to have to either cut the pants leg off or...

Just do it, Jack.