One reason I went into "comedy-article intro-writing" instead of "hard journalism" was the realization that I just don't have the "nose for news." For example, when I saw Seattle Seahawks cornerback Richard Sherman bark out 30 seconds of taunts and boasts after the NFC Championship Game, I thought "well at least that was more interesting than the usual boring, pointless sideline interview" instead of instinctively recognizing "this is an important cultural flashpoint for some reason and deserves to dominate the national conversation for days to come!" Realizing the gravity of the situation, some posters in SA's Football Funhouse forum wrote serious words about racist tweets and cultural context, but fortunately their efforts were overshadowed by pro-wrestling-themed jokes! 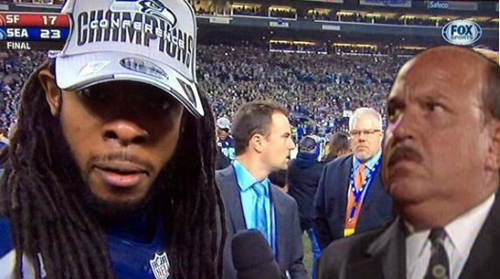 I TELL YA WHAT MEAN GENE MICHAEL CRABTREE AINT SHIT 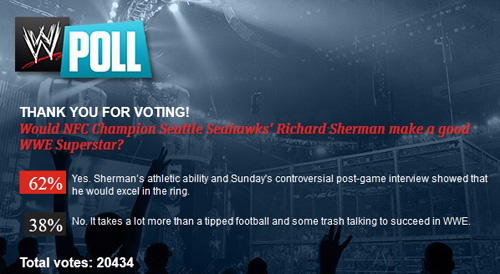 How the fuck can anyone be offended by a real life person sounding like a professional wrestler for 30 seconds?

WAIT A MINUTE, THAT'S NOT THE BRONCOS THAT'S THE 2005 PITTSBURGH STEELERS COMING OUT OF THAT TUNNEL. WHAT ON EARTH IS GOING ON?

Percy Harvin cleared for Superbowl, but turns around and runs into the endzone for a safety, takes off his jersey, reveals a Broncos jersey, then body slams an incredulous Russell Wilson onto the Univision section of the press box while Troy Aikman yells NOOOO NOOOO NOOO

Sherman climbs the ladder and prepares another brutal body slam against a prone Peyton Manning.

Troy: SOMEONE NEEDS TO STOP THIS! SHERMAN HAS LOST HIS MIND! PEYTON IS COMPLETELY UNABLE TO DEFEND HIMSELF OUT THERE!

Joe: WAIT A MINUTE, THAT'S ELI MANNING'S MUSIC! (Hip to be square blares into the arena)

Sherman lands on the Mannings with a disturbing thud. 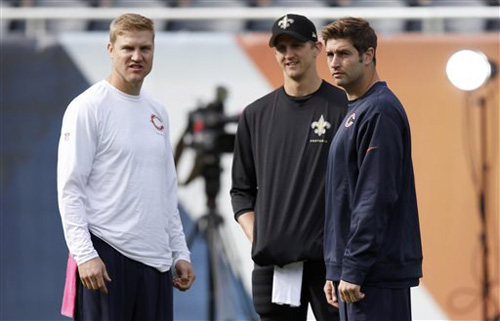 Tirico: And there it is! Brees has put Kaepernick in The Birthmark! I don't believe it, Kaepernick is going to tap! And McCoy can only stare ahead into the distance, unable to understand what's going on.

Gruden: THIS GUY MCCOY. I CALL HIM THE HUNG-OVER TOURIST BECAUSE HIS HEAD HURTS AND HE DOESN'T KNOW WHERE THE HECK HE IS.

Tirico: And Brees is going over to celebrate with his teammate. OH NO WHAT'S HAPPENING? LUKE MCCOWN JUST HIT HIM IN THE FACE WITH THE CHAMPIONSHIP BELT! BREES IS DOWN!

Gruden: That's some great treachery right there, Mike! I haven't seen anything like that since Kim Philby. I tell you what, if you want to see a guy turn on a dime and hit you in the face with an inanimate object, you need a guy like Luke McCown, a guy who's seen it all, a Gruden Perfidy Grinder.

(Survivor's Burning Heart blares out into the arena)

Josh McCown climbs up into the ring, grabs the belt with Luke as they celebrate over Brees's prone body

Tirico: I CAN'T BELIEVE WHAT'S HAPPENING! THE MCCOWN BROTHERS ARE BACK TOGETHER!

Luke McCown runs back stage as the cameras follow him. He picks up Cooper Manning and throws him into four full Gatorade dispensers.

Gruden: I love these guys.