Paperrad, submitted by MiRRoRMaN. This site features some of the most painful graphics and web design I've ever come across, although I'm sure that was partly the intention. There is enough visual stimulation present here that this site could easily cause an epileptic person to explode like an atomic bomb over Hiroshima. It's colorful, it's spastic, but it ain't pretty. The most exciting feature on this site is the handful of truly dreadful Flash animations that skirt the border between psychedelic and incredibly retarded, generally leaning on the retarded side. While occasionally mildly entertaining, everything here just ends up causing major headaches. They feature plenty of bad voice recording, bad voice acting, bad plots, bad writing, mostly bad animations, and generally just terrible. Hell, you could even get up and write a novel during the awkward pauses. 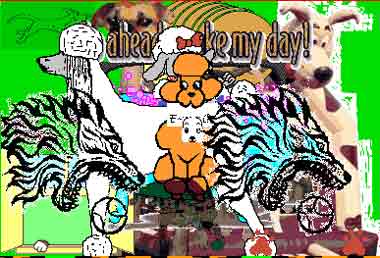 The very large comic section doesn't offer much hope either. Oodles of sprawling incomprehensible comics await you if you dare subject your eyes to the seizure inducing backgrounds! Somebody spent an insane amount of time on this site, and unfortunately it shows. There is an incalculable amount of crap here, and I really couldn't find an end, not that I tried. Sadly, for a site with so much constant movement, it really doesn't go anywhere. I'd give them props for the creative web design, but I need those props to support my damaged eyes.