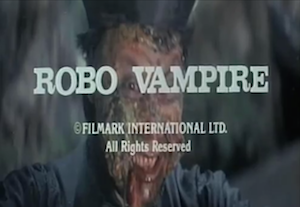 Overview: A narcotics agent dies in the line of duty by being just utterly goddamn terrible at his job, but gets resurrected as a robo-android-machine-man-dude who is somehow even less effective at stopping drug smugglers than before (and also totally nothing like that other Cop Robo guy from that completely different movie that he's honestly never even seen).

The Case For: Given the amazing DVD cover and the drug-centric plot, you should pretty much be expecting a shot-for-shot remake of Robocop 2, which means you can just go ahead and watch a shitty Chinese bootleg of that movie instead and pretend you saw Robo Vampire. Yes, that's right, the Case For involves watching a completely different movie than this one.

The Case Against: Robo Vampire offers lots of new contributions to the vampire mythos that nobody ever asked for, like "vampires like to hop around everywhere like Special Olympics sack racers[1]" and "vampires' ultimate weakness is sticking post-it notes to their faces." Also, the instant classic "alpha vampire can be identified by the fact that he's wearing the other half of the secondhand gorilla suit from Robot Monster." 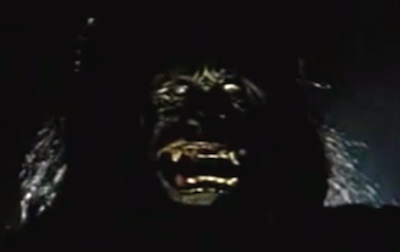 Godfrey Ho's list of directorial credits reads more or less exactly like a long list of parody titles that a pair of bitter goofball comedy movie reviewers might come up with to make fun of some asshole who churned out 500 nearly indistinguishable meat-slapping, jump-kicking, head-scratching Hong Kong cheapies, including every possible combination of the words "ninja", "thunder", and "kick" that you can even imagine, and then some.

Robo Vampire is, therefore, something of an anomaly for Mr. Ho, since it features none of those words - and even more shockingly, there's not a single actual ninja in sight. In some ways, the title Robo Vampire is actually selling this movie short, because not only are there both robots and vampires galore; there's also a ghost, a sorcerer, drug smugglers, fake drug smugglers, smug drugglers, and our personal favorite: cocaine-slinging Canadians with giant porno mustaches. On the down side, we're pretty sure nobody actually manages to become both a robot and a vampire at the same time, but then watching this movie is a lot like watching The Karate Kid after injecting a shitload of peyote directly into your optic nerves, so we're not actually sure of anything that may or may not have happened.

Now, there've been many different incarnations of the movie vampire mythos over the years, from Nosferatu all the way down to fucking Twilight, but as everybody knows, one thing all classic vampires have in common is that they're locked in an eternal struggle with their mortal enemies: DEA agents. We can-wait a minute, what? Drug smugglers using vampires to fight the DEA? Okay, you know what, never mind, we're sure that makes perfect sense and maybe something was just lost in the translation. Maybe those agents are actually just really underdressed werewolves or Keanu Reeveses or some shit. Let's just move on to the nice, sensible forbidden Ghost-Witch/Ape-Vampire romance subplo-uhhh - nope, hang on, that doesn't sound right either&well, how about these Chinese-Canadian mafia drug kingpins-no, no...

Well fine, if nothing else in this movie makes the slightest bit of sense, at least the part that's a blatant Robocop ripoff must be predictable, right? Wounded cop gets subjected to deluxe experimental android treatment with the primo all-weather carnauba wax finish, becomes an invincible metal law-enforcement machine who will bring those petty criminals to justice at last, etc. -

Son of a bitch.

In the end, the one coherent thought we can make out from the madness is that Robo Vampire is a classic story of (drug) cops vs. (heroin) robbers...or at least it might have been, up until the backflipping kung-fu vampires showed up. Now, we're not big-time professional drug smugglers or anything but our general feeling is that if we were having trouble with the DEA, "bunny-hopping Chinese vampires" would probably fall a little further down our list of possible solutions than number fucking one. In fact, it would probably be somewhere way down there between "putting paper bag full of dogshit on the front porch of DEA HQ, ringing doorbell and running away really fast", and "walking up to nearest agent with an open suitcase full of pure, uncut cocaine and saying 'Hey guy, arrest me please!'"

[1] "...but occasionally take breaks from that to do sick 720 spinning backflips and/or bite your face off..."