Psychic Kids, submitted by Zandi. At first glance Psychic Kids seems to be either some sort of horribly drawn kid's comic/cartoon or some stupid pseudo-religious "be positive" group for kids. While Psychic Kids contains aspects of both of these the truth is far more terrible. 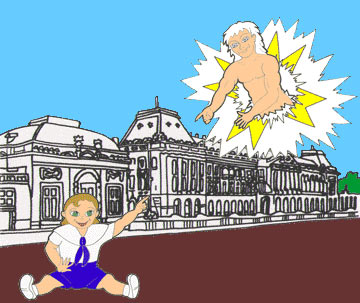 That's Little Leo, the creation of batshit nuts and creepy kid's cult leader Leo Jean, who seems to believe that he has all of the same powers as his fictional character. These powers include the ability to summon aliens through time and interview them for vague but slightly unnerving reasons, the ability to KILL EVERYONE ON EARTH IN A SECOND - a power that he thankfully never uses - oh and he can summon a Pegasus of Light to fight the Pegasus of Dark which snatches little children away. Basically he's setting himself up as god to little kids, a concept that has so many problems with it I couldn't even get within spotting distance of the tip of the iceberg.

In 1986 I encountered a group of aliens whose ancestors were so negative that they had completely destroyed the ecology of their home planet. The Chevarians had long ago moved underground. When the leader of the race attacked me, I temporarily suspended him until that I could find out what he wanted. 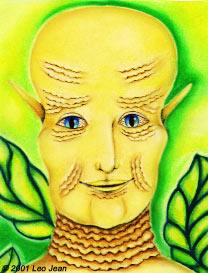 LEO: Why did your race set up operations on Earth?

CHEV. EARTH LEADER: When I was sent to Earth, my race was already declining in numbers, and we were seeking ways in which to make our females able to have more babies.

The site is PACKED with disturbing sections like the alien interviews. I could link you to one but seriously, if you never want to sleep again just read the whole fucking site. Find out about Leo's adventures with keeping his psychic powers, discover just what the story is with that black pegasus, and watch Leo fight aliens with the power of his hippy-dippy "Light". Also be sure to check in at Big Foot's Poetry Planet where a heartwarming wookie discovers a little bit about himself and a lot about the world through the healing power of poems.