Anton Vore Site, submitted by Orange Dolphin.If you have been following the recent trend of my awful links, you might notice that I have been targeting furry vores quite a lot lately. This has caused me to receive dozens of yiff encrusted hate mail, giving me much emotional trauma, and making my life a living hell. I feel it's only fair that I come clean on why I am so cruel to these people that like to dress up as animals in suits with holes for their penis and butt, and masturbate to the thought of a chubby unicorn gobbling them down whole. The truth is that my little brother was kidnaped by these dastardly fiends, and devoured as a part of the furry ritual of acceptance into the herd. I swore to have my revenge on these beasts, so like the Punisher, I have given up civilian life and have gone to war!

Anton the vore is my target this week. His site is a supplement for his vore role playing fantasies, complete with poorly drawn artwork, and an in depth look at his characters. Anton himself is included at the bottom of the character list, and boy does he look hungry! 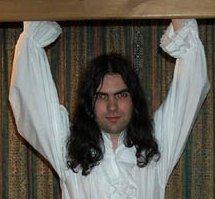 Chaosexual or just a fag?

"Anton is a Chaos sorcerer of human stock. Some say he has slightly elven features, but if an elven ancestry is present it is probably several generations away. None the less he is an alchemist of some repute, has mastered the Great Work and made many variations on the philosophers stone. The powers he has obtained have given him eternal youth, the ability to heal, the ability to shapeshift, shrink and grow in size, he may also shrink and grow others if he chooses. He can also reform his body after death. He may also travel invisible, or even in ethereal form. Sexually he is a Chaosexual (in other words he enjoys sexual pleasures with men, women, hermaphrodite, asexuals, himself, machines and just about anythingHis styles of vore as a predator vary, his main powers are...

This shit sucks. I hope Anton chokes on a little boy has to eat through a tube. Although I do have to give him credit for his character "Lord Amphagon of Chaos". That guy kicks ass.