John Titor - Time Traveler, submitted by Id Hit It.... One of the greatest things about this system of global interconnectivity we call the internet is that it creates a forum in which people feel that they can come forward without fear of embarrassment or ridicule. I'm sure that is why John Titor, time traveler from the year 2036, decided that his message would be best heard online.

Although there is debate over the exact date it started, on November 02, 2000, a person calling themselves Timetravel_0, and later John Titor, started posting on a public forum that he was a time traveler from the year 2036.

One of the first things he did was post pictures of his time machine and its operations manual. As the weeks went by, more and more people began questioning him about why he was here, the physics of time travel and his thoughts about our time. He also posted on other forums including the old Art Bell site. In his posts John Titor entertained, angered, frightened and even belittled those who engaged him in conversation.

On March 24, 2001, John Titor told us he would be leaving our time and returning to 2036. After that, he was never heard from again. Speculation and investigation about who John Titor was and why he was online continues to this day.

For those of you who are unfamiliar with "the old Art Bell site," Art got a kick out of letting society's most insane nutcases spew their attention-grubbing claptrap to their hearts' content. John's greatest talent, which I'm sure is genetically engineered in the future, is to create an air of plausible deniability. If he predicts something and it comes true, it's because he's from the future and knows all! If he predicts something and it goes wrong, it's because this "worldline" is slightly different from his own. But what's most important about John's visit to the past is his harrowing vision of things to come. 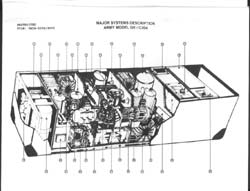 There is a civil war in the United States that starts in 2005. That conflict flares up and down for 10 years. In 2015, Russia launches a nuclear strike against the major cities in the United States (which is the "other side" of the civil war from my perspective), China and Europe. The United States counter attacks. The US cities are destroyed along with the AFE (American Federal Empire)...thus we (in the country) won. The European Union and China were also destroyed. Russia is now our largest trading partner and the Capitol of the US was moved to Omaha Nebraska.

So there's a civil war in America in which the country folk rise up against the fiendish city slickers. Russia, obviously being a part of this civil war, decides to launch nukes at the U.S., China, and Europe as a whole. Rather than obliterating every square inch of Russia with a nuclear response, the U.S. decides to forget about the smoldering craters that were once Europe and China and ally with the nation that just launched the most devastating attack in the history of mankind against them. Since the massive nuclear strikes obviously have no impact on the planet's ecosystem and nuclear winter turns out to just be some peacenik hoax, the surviving Americans have no trouble converting to a farm based nation of treetop villages. Despite the loss of three billion lives worldwide, things return to normal almost immediately, and within another twenty years, the scientists who have nothing to do, since determining a way to keep all biological life on the planet functioning and finding cures for the myriad forms of radiation sicknesses aren't even on their agenda, perfect time travel. Man, it's a good thing all of those brilliant scientists and their labs were all based out in the open country, nowhere near any of the major cities, or they might not have been able to send some randomly chosen guy back in time to chat on the internet!

The site archives all of John's chat messages to the people of the past, as well as offering commentary on every word he ever wrote as possible predictions. You see, John was apparently the most cryptic person who ever lived, and everything he ever said was a clue about some major event.

Is it possible that John Titor warned us of an impending asteroid strike before 2014?

From the CNN article:

"Asteroid '2003 QQ47' will be closely monitored over the next two months. Its potential strike date is March 21, 2014, but astronomers say that any risk of impact is likely to decrease as further data is gathered."

On February 26, 2001 - John Titor was asked about the date of his departure:
"I'm guessing the date of your return to the future is April 19th."

JOHN: That is a day to remember but I was thinking more along the lines of March 21.

Was this John's way of warning us? Did he give the date of an asteroid impact in 2014 that would precede a civil war in 2015?

My guess is no. Now, I'm no expert, so I'm only hazarding this guess because of the tiny little fact that if QQ47 struck the Earth, there wouldn't be three billion people left to kill with all those nukes. Little things like the apocalyptic extinction of all human life tend to make nuclear war a tad less necessary.