Thursday, Sep 04, 2003 by Rich "Lowtax" Kyanka (@TwitterHasBannedAllMyAccountsEver)
Know of an awful site? Send it to us and become a hero!

Dirty Motor Oil, submitted by John Baio. I can't name anything offhand that matters more to me than motor oil. I tried to make a list of things that I found more important than motor oil last night, but after seven hours, the piece of paper was still blank. This might've been because my pen had ran out of ink or maybe because I was trying to use a stick instead of a writing utensil, but my point still stands: motor oil is very important. The people behind "SynLube™ Lube-4-Life™" know how crucial motor oil is to maintain the healthy active American lifestyle of train rides and rigged election booths, which is why they're more than excited to explain to you the conspiracy behind the crooked motor oil industry and how SynLube™ Lube-4-Life™ can change your entire way of existence. They're so excited that they often write broken, nonsensical, rambling sentences whose only redeeming characteristic is the fact that they cannot be read thanks to the brutally terrible background. 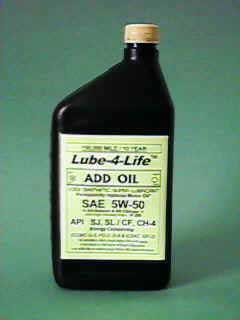 Perhaps you have seen popular TV game show "Family Feud". This more than decade old, and still on the air show is very popular. Unlike the current #1 TV show – "Who wants to be a millionaire?", it is not based on fact or knowledge, but on an opinion.

"Usually you will need 10,000 gallons of AIR to burn 1 gallon of Gasoline." It makes no difference if it is NASCAR racer, or family car just idling in the perking lot, when 1 gallon of fuel is burned, 10,000 gallons of air are consumed. If your car has an AIR FILTER, as most cars do, then ALL this air has to go through the AIR FILTER ELEMENT. In most modern cars AIR FILTER will last 30,000 miles or even more. Even if you have extremely economical car, that gets 30 MPG, to make the computations simple; In 30,000 miles you will have consumed 1,000 gallons of gasoline (30,000/30). This means that you have sucked through the engine and through the AIR FILTER 1,000 X 10,000 gallons of AIR = 10,000,000 or 10 million gallons of air! Now if you do that "3,000-mile oil change" ritual with petroleum motor oil, you would have been through 10 oil changes. Now if you look at air filter with 30,000 miles and ALL that accumulated dirt, it is barely gray.

I have a news for you: EARTH IS FLAT!

I have a news for you: I DON'T UNDERSTAND WHAT THIS GUY IS TALKING ABOUT! I'm going to err on the safe side here and refuse to purchase any motor oil in the meantime though, because the last thing I want to do is encourage the people who believe the Earth is round and "Family Feud" is a bad show or whatever the hell this site is trying to warn me about.