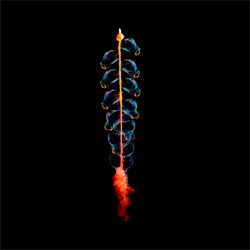 I don't know what this thing is but I'm sure it's about to send a water tentacle into a submarine.It's one of those universal "deep thoughts" questions as compelling to scientists as it is to baked college kids.
The smug and willfully stupid answer is, "No, obviously we're not alone, because we're living on a planet surrounded by all manner of life forms." Then James Cameron pops out with some kids and submarines and starts talking about undersea vistas and crabs that eat smoke or something.

The dumb answer isn't completely off-base. Dolphins and some monkeys are about as smart as humans. I think I read that dolphins communicate with one another on almost the same level as humans, although I admit it might have been a dream. Monkeys, well, the smart ones, have IQs up there with retarded kids, so I figure there is a monkey Einstein out there somewhere that did something really amazing like bought a shirt or emailed somebody.

Even dogs and horses get their own TV shows and those things are dumb as hell. Have you ever asked a horse what time it was? Totally useless. They think your fingers are carrots and we act like they're the next Isaac Newton when they can add three plus three by stomping on the ground.

Humans even existed with a whole other race of people you might have heard about called Neanderthals. They died out long before conservation movements really got off the ground, so we didn't care about them dying. I'm not sure what happened to all of them, I guess maybe they just couldn't tell time and missed their "not dying" appointment.

Neanderthals, dolphins, horses, and the rest of the animal kingdom are pretty much bullshit. They're fun for a while, but most of those animals have trouble staying alive and we're not even trying to kill them anymore. I saw on the news people trying to save a whole bunch of dolphins that got confused and swam onto a beach and were dying. Jeez, welcome to baby time.

Who is going to get excited about meeting a dolphin when that's the best they can do?

Morons. Until dolphins or cats evolve some literacy we're going to have to keep dreaming of outer space and the aliens if we want some intelligent company.

Go ahead and ponder the infinite vastness of space, the swirling galactic arms, and millions of stars stretching out to the expanding threshold of our universe. Then realize that if there is something out there, you probably don't want it to say hello. That guy with the wild hair in your apartment building scares the hell out of you. Try imagining him with a spaceship that can destroy cities.

My theory about the probable unpleasantness of alien life forms has been given a great deal of thought by science fiction. The idea of a first contact with alien life is one of the well-trod roads of the genre and probably our best resource for potential lessons about meeting extraterrestrial life.

Lesson #1 - Most aliens want to kill you… 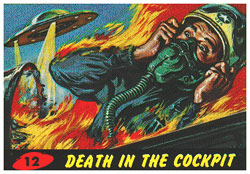 The alien doesn't even have to be animalistic like an H.R. Geiger bug-man leaping out of ducts or some salt-sucking siren, it could just like the taste of humans. Take "V" as an example. The aliens in V seemed pretty nice until the blue-blockers and rubber mask came off and you realized they were lizard people with a craving for something a little more substantial than ants. I mean people. They ate people.