Pregfur, submitted by Somed00d. Furries have an incomparable ability to spawn subsets of their vile fetish, each more interesting than the last. I've seen my share of macrofur sites, vorefur sites, and even crushfur sites, but Pregfur.org is the first site I've seen devoted to combining furries with pregnancy. 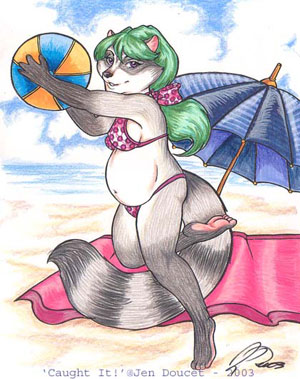 He looked down at my belly, which immediately swelled into a stage of pregnancy so advanced that the lumps of the eggs were actually visible throgh the skin of my underside. I suddenly felt very protective. My mate approached me then and locked me in his embrace.

"its good to have you back Skysearch." I couldnt find anyway to answer my mate, so I just held him.

I want so badly to develop a time machine, head into the past, and erase every single cultural item that has lead to the creation of furries and their subsets. When I read an "erotic" story about a cheetah being pregnant it doesn't just churn my stomach it actually freezes my blood in my veins. Give me a sturdy axe and a direction and I would gladly cut a swath of destruction through all of the furries on the planet, reserving special chopping for those who weren't satisfied with simply sexualizing anthropomorphic animals. No, for the pregfurs no quick death, no quarter.

I kid folks! I'm a pacifist, even when it comes to wonderful folks like the pregfurries. Hell, I'll even encourage you faithful readers who might be interested in their exciting new fetish to explore their official forums.