Tuesday, Oct 07, 2003 by Rich "Lowtax" Kyanka (@TwitterHasBannedAllMyAccountsEver)
Know of an awful site? Send it to us and become a hero!

The Medusa Realm, submitted by Mr Bleak. Throughout the years, we here at Something Awful have taken pride with bringing you, the viewer, some of the most insane and twisted sexual fetishes throughout humanity. The Internet serves as a great conductor of sexual energy, as its lure of completely anonymity coupled with the ease of finding similar individuals with the same fucked up sexual fetishes really brings the nutjobs out of the woodwork and into public view. Since anybody's identity can be effortless disguised under this digital medium, online sexual liberation can be achieved within seconds of finding a competent search engine. Let's say you're sexually stimulated by images of 19-year old Mexican amputees who ride motorcycles and drink milkshakes. This is your most prized fetish and you have never been able to speak to anybody about it due to the inherent embarrassment and shame. However, after logging on and checking out a few sites, you realize that there are other wackos out there who share your same interests and spend all their free time Photoshopping the limbs off 19-year old Mexicans riding motorcycles and drinking milkshakes. After a while, you begin to think that since you hang out with so many people who share your fetish, your sexual preference is now something which should be considered "mainstream" because your exposure to your microcosmic culture has influenced your perception of our macrocosmic culture. What I'm trying to say here is that although the Internet can be a great tool for uniting people who share similar interests, it also has a very negative side effect of convincing these people that their wacky interests should be accepted by popular culture and they shouldn't be treated as freaks and outcasts, which they clearly are. Today's Awful Link of the Day, a website devoted to people who enjoy jacking off while looking at pictures of statues, embodies this concept. 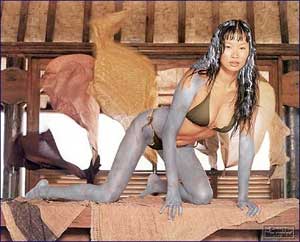 Soon the three friends of Lisa are once more transformed into plastic but with their minds and senses fully satisfied. Sara starts off toward her office; pausing beside Lisa who feels Sara's warm hand on her arm a moment before she finds her body paralyzed too. Sara has used a mannequinizer on her.

"Time to join your friends, dearie."

Lisa stands helplessly like a statue as Sara unbuttons Lisa's blouse, opens the front seam, and puts her hands firmly around Lisa's full breasts. The feel of Sara's hands, along with her own abrupt immobility, sends shivers up Lisa's spine. Sara reaches up and pulls the shirt off of Lisa's shoulders. Next she walks around the rigid figure and unclasps Lisa's bra, allowing its lacy form to fall loosely onto her stiffened arms. Standing behind the immobilized girl, Sara encircles her torso to once more fondle Lisa's firm round breasts. Noticing that Lisa's nipples have become hardened buttons, Sara knows her stimulation efforts have not been wasted. She lets her hands glide across Lisa's supple body downward to her waist and slacks, the next line of resistance. Unbuttoning them and spreading them open across the frozen girl's hips, Sara pushes the garment down to Lisa's ankles.

OH SWEET, PEOPLE HAVING SEX WITH MANNEQUINS, THIS IS THE KIND OF SHIT I ALWAYS WANTED TO READ BABY! I guess some of these freakjobs enjoy the company of mannequins and statues over actual living human beings, because I've never seen a statue complain of overpowering body odor or the fact that they are being enveloped in moist folds of their doughy flesh. Hooray for having sex with statues and mannequins!