Yodelin' Theresa's, submitted by Thanks ReginaldLinux6969. Whenever I'm feeling blue, spiritually speaking, and I can't tell if the Good Lord is still smiling down upon me, or if he turned His all-loving back on me because of that one time I was trying to make microwave waffles and accidentally established a church devoted to the worship of Satan, nothing puts my soul back on the right track like yodeling. Oh wait, no, not yodeling. Actually, I was thinking of everything else in the world besides yodeling. Whoops. Nonetheless, Yodeling Theresa wants to fill you with a love for Jesus the only way she knows how - by playing the same two chords over and over again and screeching like a banshee into recording equipment that a seventh-grade garage band would dismiss as being too shoddy. 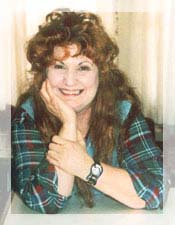 The song "I Wanna Yodel for the LORD!" was the new spiritual beginning for Yodeling Theresa. After 20 years of alcohol and drug abuse, and several failed marriages, her willingness to go on in this life began to look bleak. Then one day, the Holy Spirit spoke to her and said, "Look what you're doing to your children." Not being a Christian, Yodeling Theresa cried out to the Lord that she wanted to change her life, to become a better person. Through these times talking to the Lord, God gave her prophetic dreams and visions. These visions help her to write songs such as, "I Wanna Yodel for the LORD," and to obey the Lord.

Believe me, Yodeling Theresa, those visions and songs aren't coming from divine inspiration. I've heard "I Wanna Yodel for the Lord," and I feel pretty safe in saying that the only inspiration for that one was your brain trying to shut itself the hell down rather than face massive amphetamine withdrawal.

You can download some samples of Yodeling Theresa's religious caterwauling on her site. Alternately, you can cram an entire soda can into your inner ear. Yay Jesus!