Gaming Update From Your Aunt or a Major Print News Outlet

Lord of the Rings Finally Comes to Nintendos!

The latest game kids are talking about isn't Pack-min or Laser Blast. It's Shadows of Mordor, the latest installment in J.R.R. Tolkien's fictional world of orcs and dungeons.

But it's not just for nerds! This mega-selling game cartridge can plug into practically any machine on your tv. Once inserted, the realistic graphics will transport you to another world.

There are more than three attack buttons. Movie-like sequences tell the story with camera angles and real recorded dialog - an industry first, making it the most cinematic video game ever made.

This Christmas be sure to look for the box with Mordor Man on the cover.

Everyone has a favorite Nintendo character. 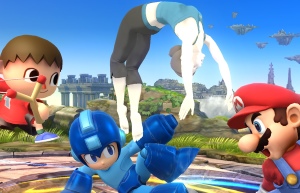 But it's not possible to know which character is truly the best at fighting. Until now. For the first time players can make their Nintendo guys hit each other for fun. The game is called Super Smashing Brothers Wii U and it is coming to the popular Nintendo Wii system.

The game has caused quite a viral stir online. Fans are abuzz with excitement for Nintendo's first foray into boxing.

When one man falls down there appears to be an explosion and after that he comes back invisible for a few seconds. Presumably this is going to receive a hard R rating from the ESRB.

The game is not just about "vegging out". It features an innovative personal trainer character to keep players healthy in real life. I'm looking forward to using this workout mode with the Octopus virtual reality harness.

A controller is required. There is also a version that fits on the New Game Boy 3D and it is compatible with multitap and the printer.

Will the gamble pay off? Early impressions are positive, mainly due to the game's roster of several characters. Power ups make your little guy happy for a few minutes. There's even a menu with options that can be selected.

Games have grown up!

Microsoft did not make a next generation video game system. They're playing it smart and letting the PlayStation 4 test the waters.

In the meantime Microsoft has put out the Xbox One, which is a re-release of the original Xbox with a snazzy new case.

Everyone seems very excited about playing Halo again on it. Good for them!

There have been five Worldo Warcraft games since the first one came out nearly ten years ago. Each game gives players new men and monsters as well as access to online.

The whole thing is played with other players, an innovation that Blizzard came up with. By using Cloud Computing for everything players only have to install the game on their machine. No more dealing with the hassle of patches.

In the newest Worldo Warcraft players get expanded inventories. There are even new quests, and I saw a man with a horse.