Mr. Puppet, submitted by Perv Griffin.Hey kids do you like puppets? Yay, who doesn't? Unfortunately with the death of Jim Henson, puppeteering is a fading art form and I wanted to find out why. I had my various agents scour the Internet looking for the most talented puppeteers on the planet. After years of searching, they didn't end up finding any talented ones, but they did find Bob Abdou! Bob loves to puppeteer and loves to please children. Despite his handicap of being horribly unfunny, he sure gets around, and has been on a variety of talk shows, including Space Ghost for a 30 second guest appearance. Unfortunately, Space Ghost blasted him with a laser before he got to start his act, but it was still a big break. Once you have acquainted yourself with "Mr. Puppet", go ahead and click on his "puppet family". DO IT! The first few seem normal enough and well made, but as you descend, things get ugly. Fast. 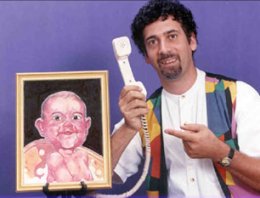 WHAT THE HELL IS IT AND WHY DOES IT WANT TO TALK TO ME?!

I don't know what the hell that thing is supposed to be, and I don't think I want to know. It looks like a haunted hog baby picture with telephone attached. He says: "You gotta to talk to the baby!". Clearly there is no choice but to run at that point and hope the baby doesn't call you at home and mutter "7 days...". Many of the puppets are horrendously scary and hurt me on a deep, personal level. But the real question is; do the children like them?

Well, it looks like those kids are having a good time. Maybe I'm just a jaded old curmudgeon that doesn't know how to have a good time. Wait a second...let's take a closer look here.

Sweet gentle Jesus! That boy's mind has snapped! The confusing horror that is Bob Abdou's puppet show has destroyed his sanity, and he will be spending the rest of his life in a mental institution drawing little crosses on everything. Really though, this guy isn't as bad as a furry or angsty goth poet, and doesn't deserve the guestbook pillaging that I know you fiends like to partake in. He's just trying to entertain the little children, but somebody needs to tell him to stop making fucking scary puppets and spreading mass insanity. Also he needs to be kicked in the throat and back with steel toed boots for making those Beatles puppets.