Rob's Necrophilia Fantasy, submitted by Awa. This is one of those cases where the title of the site really says it all. His name is Rob, and he wants to have sex with dead people. He'd also like to educate you about having sex with dead people, or, in a pinch, sleeping people. Don't go thinking he's a weirdo or anything, though. I mean, he's really just an ordinary guy.

Over the past 5+ years my interest in necro has evolved into a more subtle, passionate experience. I find I want less for an actual dead corpse as much as simply an unconscious girl... someone willing to allow me "access" when they are out.

See, he's just like you and me! Well, except for the having sex with dead and unconscious people bit. It's really amazing just what lengths people like Rob will go to explain why their twisted fetishes are really perfectly normal and acceptable. It's also pretty damn funny how those explanations inevitably just make his case look worse. 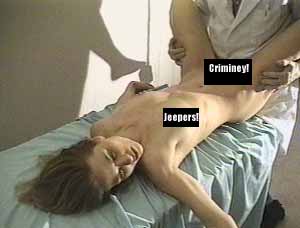 Much like in real life, us guys remain the "performers"... the one's doing the sexual act to the woman. There is an interesting irony to the true sexual desires of males in general. While many guys would view necro as some perverse interest, those same guys would probably take interest in getting some girl drunk into unconsciousness at a bar and having sex with her.

Uh, no, actually, they probably wouldn't, because most guys aren't, you know, date rapists. Another justification Rob tries to use is that necrophilia is okay because it has existed for thousands of years. He gives the example of an ancient Greek myth about Achilles killing the Amazon queen Penthesilea, removing her mask, and being so overcome by lust that he has sex with her body. The thing is, Achilles is not known for being prone to what one would call "good judgment" or "common sense." Also, he had to sacrifice to three different deities and go through a purification ceremony with Odysseus to be washed clean of his horrible crime before he could rejoin the Greeks. Not exactly the strongest case supporting necrophilia, is it?

In addition to the history and detailed explanations of necrophilia and "sleepysex," Rob's site has a few series of images of people enacting their horrible fantasies of molesting corpses, as well as legal information about your right to appropriate the corpse of your loved one for whatever purposes you see fit.

As you would expect, taking the dead body of your loved one home with you does provide certain 'opportunites'. While that doesn't make it legal in the technical sense, it's not likely you'd get caught anyway providing you followed the entire body disposition process according to the law. Of course we are talking about expressing your last moments with a loved one in a final sexual intimacy. You certainly don't need to have a necrophilic interest to decide to share in this manner. We are human beings and we tend to express ourselves sexually with those we love. It's only natural to want to do that after death in a final act of closeness doing something you both enjoyed while alive. Given the condition of the body, the surroundings, the environment, and your personal grief, you would certainly have enough privacy to decide to do whatever you wished.

If you are male and wish to make love with your loved one you could conceivably leave your semen within an orifice as a symbol of your eternal presence within them. If vaginal and/or rectal you can simply insert some cotton inside to form a plug thus reducing the embarrassment of seepage to outer garments during a wake. In the mouth... perhaps some cotton there if you are unable to close the mouth entirely.