The Stampede, submitted by Marie. Existing somewhere in the wonderfully wholesome gray area between furries and sadomasochists are the pony roleplayers. These perfectly healthy and well-adjusted people like to wrap themselves in leather, just like a real pony, and be paraded around by a cruel master. I think if the human race leaves one legacy behind, it will be the ability to look at something innocent like a farm or a zoo, and be inspired to develop a form of sexual deviancy based around it. What remarkable talents our race has!

Animal roleplay is a form of fetish play that involves an exchange of power, typically between a human "trainer" and another who assumes the role of an animal. In ponyplay, the animal is a "human pony." Typically the pony is required to perform actions that a pony would perform, such as running on a lunge line, pulling a cart, carrying a rider or being groomed, inspected and shown. Ponyplay is not about abuse, non-consent, or bestiality. 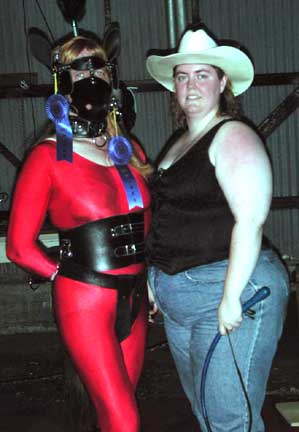 I don't think so!