Mike Diana, submitted by Lady J. With a name like Mike Diana, you might worry that you're about to read about some transvestite or wannabe transvestite's artwork, fanfiction, and disturbing "erotica." You'd be wrong this time, but at least you could be secure in the knowledge that, like me, you've been horribly corrupted by this melting pot of perversion and sexual misadventure we call "internet." However, just because Mike Diana is not some sort of freaky man-woman does not mean that he's anything even remotely resembling a functional member of society. He's a cartoonist with two convictions on his record for obscenity. Considering his "artwork" looks like this, I'm not terribly surprised. 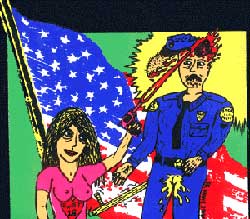 In 1994, underground cartoonist Mike Diana was thrown in jail for 4 days without bail on obscenity charges, for publishing, advertising, and selling his zine BOILED ANGEL. Mike was on probation for 3 years, terms of which included fines of $3000, no contact with children under 18 (or within 10 feet of a minor), 1280 hours of community service, maintain full time employment, and at his expense, see a psychiatrist and take journalism courses at his own expense; AND no drawing for his own personal use... his home was subject to unannounced searches by local police to make sure he was complying. Mike Diana is now serving another 2 years of probation, including $2000 in fines, and the same probationary terms.

Well aren't we all proud of Mike? It's not just anyone who can be forbidden from getting within ten feet of a minor just for drawing pictures. Hell, not even furries have to deal with that, although maybe it would be better if they did. And yes, that picture above is precisely what you think it is: a girl in a "sweet 16" t-shirt shooting a policeman in the skull in front of the American flag. And of course, the policeman is soiling himself. I'm a fan of ultraviolent comics, such as "The Authority" and "DV8," but this kind of shit is just plain wrong. Maybe I wouldn't have such issues with Mike Diana if his artwork was better. The problem is, he's not even that good, which raises the question, why does he think he can make a career out of cartooning? Anytime he tries to draw something, he has to pay thousands of dollars in fines, work thousands of hours of community service, and is forbidden from being in the same room as children. He's even forbidden by law to draw anything else! You'd think he'd get the hint that maybe, just maybe, he should look into another career path. 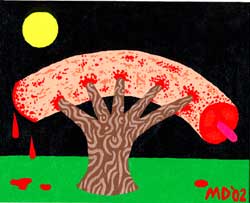 Hurrah. Now, if Mike's site was just a celebration of his inability to get the point, even when the entire judicial system crams it down his throat, as well as a venue for selling his frightfully unpleasant artwork, that would be bad enough. But the site itself is also a travesty of design, full of agonizingly bad backgrounds, irritating flashing GIFs, and of course, this (do not click at work, or around family, or ever). Because of this, any visit to Mike Diana's site is roughly the ocular equivalent of the above drawing - a tree puncturing a bloody penis. Mmm mmm good.