Wednesday, May 19, 2004 by Jedidiah (@notoriousamoeba)
Know of an awful site? Send it to us and become a hero!

IKV Bloodlust, submitted by Sabrina. If some internet subculture ever decides to fetishize the act of dressing up as klingons, this site will be their premier source of jerk-off material. In what will go down in history as one of the greatest accomplishments in the history of insanity, the IKV Bloodlust homepage contains several gigabytes of photos of middle-aged nerds in klingon makeup shot from every conceivable angle. There are also pictures of new recruits going through a hazing ritual that involves drinking the blood of virgins, which I assume was donated by the other members of the crew. 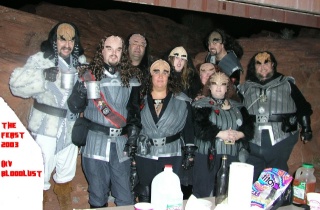 nuqneH? So you want to be a Warrior. You think you are good enough to join our crew? Well that is for me to decide! I am Cmdr. Karn sutai-Heck'Lher of the Klingon Empire. I will evaluate you and then inform my Kaptain, KataH epetai-Heck'Lher, if you are worthy of joining us. But first I will tell you a little about us.

The IKV Bloodlust is a very active and loud vessel. When we are not insulting non-Klingons, we like to drink warnog and bloodwine, sing many a Klingon song, and further the interests of the Empire. We have a saying on our crew HIra'taH yInwI', meaning in your weak English, "My life at your Command". Our lives are at our Kaptain's command, for we would die for him, our fleet commander and the Empire!