Tuesday, May 18, 2004 by Detective Stive Gonzales
Know of an awful site? Send it to us and become a hero!

Oops! Paste, submitted by Killdeer. In one of my recent investigative reports, "Children: Young Growing Adults or Professional Killers in Training?", I revealed a dangerous trend that could tear apart the very fabric of our society: cursing. A highly educational and informative survey I created by using my computer and some paper revealed that over 95% of children under the age of 28 have admitted to cursing at least once in the past decade. Furthermore, 86% of these kids described themselves as "social cursers," and 13% admitted they were addicted to cursing! I suggested that, in order to prevent thousands of innocent people from dying of curse-related injuries, we load every single child in the world into a very large cannon and then point the cannon at an active volcano and then drop large nuclear warheads on both the cannon and the volcano. It appears as if an independent contracting company entitled, "Oops! Paste," has devised a much cheaper and effective solution to this critical cursing epidemic, which appears to be some kind of goo that you throw into somebody's mouth when they mutter a dirty word! It may be crude but it sure as heck seems effective! 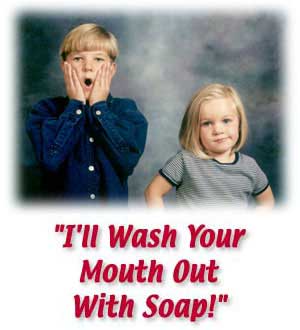 There are approximately five hundred thousand words in the English language. With such an arsenal, parents can go on the offensive in the battle and show their children how to use powerful, effective, and moving words without resorting to speech that simply shocks. And when emotions run high, silence is more powerful then profanity!

No one needs to swear, it only cheapens him or her and makes him or her look weak. Men and woman of power have no need for foul language, it only makes them look small in the eyes of other people.”

I agree completely, and upon studying the above picture from their website, I have made the following shocking discovery: 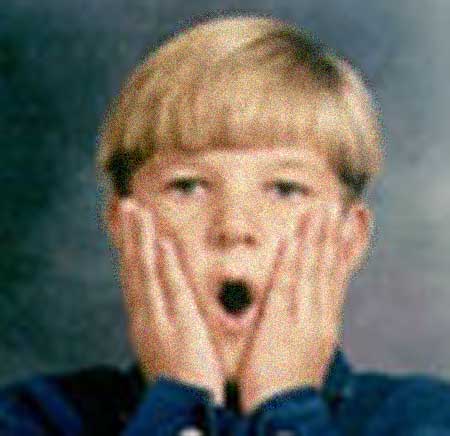 THIS CHILD'S FACE IS COVERED WITH MILLIONS OF DEADLY MICROSCOPIC VIRUSES WHICH COULD WIPE OUT THE ENTIRE HUMAN RACE! Are you safe from these unpredictable new diseases leading scientists are discovering every day? Find out on my next investigative report, "Could Your Own Face Be Your Own Tombstone?"