NBC recently lost its patience with My Own Worst Enemy, canceling the schizo-spy debacle after five episodes. It's encouraging to see the program that inadvertently launched the TV Threshold concept die prematurely, and I can only hope every featured show meets a similar fate. This week's winner of the memorial My Own Worst Enemy award for instant ineptitude goes to Knight Rider. In a minute of accidental viewing time, I saw some schmuck, interrupted during a make-out attempt by a talking car that sounds like a lame-sequel Batman, say "bussss-ted," followed by a preview for a road-trip episode in which two douches simultaneously shout "Vayyyyyy-gussss!" I hope this show crashes and burns, leaving a mangled K.I.T.T. to whine in a pathetic voice about his body damage while oil floods his automotive lungs. Inspired, I planned to brave other hour-long dramas, until I spotted a couple sitcoms that demanded investigation. 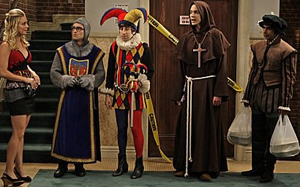 Ren Fest? Cosplay? Halloween? With those wacky nerds, you never know.The Big Bang Theory What would happen if a beautiful lady became neighbors with two exaggeratedly nerdish geniuses? The Big Bang Theory dubiously posits that the answer is "constant social interaction." Penny, a carbonated blonde, visits the geeks' apartment because she wants to watch America's Next Top Model, and she ditzed on the cable bill. Sheldon, the prissy King Dork, throws a fit because she interrupted a game of "Klingon Boggle," but the other wusses become entranced by the program, because there's no other way for people who spend all their time on computers to access images of attractive women. Sheldon also harasses Penny for touching his onion rings, as if people who look like him don't regularly make creepy clandestine eBay purchases to procure food that's been touched by someone who looks like Penny. Some sort of showdown seemed imminent, but I instinctively stopped watching when Penny proclaimed "everybody loves lolcats." It should be mentioned, with extreme disgust, that while most modern programs use a quick title flash, Big Bang Theory employs an actual theme song -- performed by Barenaked Ladies, music's version of the shitty sitcom.

Signature moment: Big Bang Theory narrowly avoided punitive elimination at the five-second mark, when the studio audience became hysterical at the sight of a "Klingon dictionary." Star Trek gags have been the laziest stroke in nerd caricature for decades, unwitting relevance due to the film franchise relaunch notwithstanding.

Suggested episode improvements: Sheldon dominates his fellow dweebs, though it appears they could physically overpower him if they worked in concert. To paraphrase Martin Prince, individually they're weak twigs, but if bundled together they could form a mighty faggot! Instead, they endure abuse at the hands of the world's fussiest bully, until they finally surprise Sheldon with the ultimate killing device, an astrophysics-based invention that makes the Final Destination deathtraps look like a fucking shotgun blast to the temple. After the contraption has finished its labyrinthine machinations, Sheldon's slayers invite Penny over for a party, but the celebration proves short-lived. Maniacal creationists, who regularly haunt the show's IMDB site and YouTube clips, storm the set in violent protest of the Biblically incorrect phrase "Big Bang Theory." No one is spared.

Worst Week: Worst Week doesn't use a laugh track, or maybe the person operating it never detected humor. It's about a klutz named Sam, who's getting married in seven days. His slapstick buffoonery leaves his fiancée's parents, with whom they're staying until the wedding, unimpressed. This is the most self-limiting premise ever created. Sam might remain unlucky and unlikable after the ceremony, but after seven days pass in the show's universe, even the title becomes instantly antiquated. Perhaps that's for the best, though, because it's hard to imagine the writers wringing more than an episode's worth of material out of this conceit. It's probably a moot point, because I'm not sure the writers will live through the season: The fact that they make jokes about prunes, train stations and "staying neutral, like Switzerland" suggests they're all in their nineties. 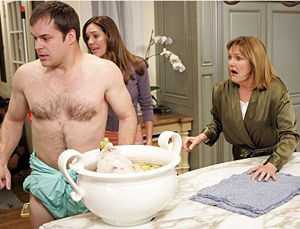 Oh Sam, will you ever win?Worst Week should be rechristened Wah Wah, with the muted-trumpet effect accompanying every humiliating pratfall. You don't even feel sorry for Sam, because not only does he repeatedly make inexplicably stupid decisions, but also he's a babbling Flanders-style doofus, the kind of ninny who calls Scotch "Scotch-a-roony." In this episode, hapless Sam a) flings a rolled newspaper into his future dad-in-law's crotch b) picks up the "wrong grandma" at the train station c) uses a wedding ring to distract a baby, only to have the brat swallow it when he turns his back d) feeds prunes to the jewelry-devouring infant in hopes of plucking the ring out of its shit e) probably does some other retarded hi-jinx, but I drew the line when he stuffed a soiled diaper in his pocket. Worst Week does not feature a Barenaked Ladies intro, which is merciful because the obvious choice, both in terms of subject matter and relative quality, would be "One Week," the worst fucking song ever recorded.

Signature moment: Sam earns the audience's enmity during the opening scene, which he spends babbling about his self-created word "wed-dule," a hybrid of "wedding and schedule."

Suggested episode improvements: On a stormy night, Sam runs into the house stammering excitedly. Before the family can decipher his incoherent ravings, he trips on the rain-slicked floor, knocking a lit candle off a shelf before concussing himself and falling to the floor unconscious. The fire spreads quickly, and the others evacuate, but there's no time to drag Sam's dead weight from the blaze. Minutes later, lightning strikes the ashen house. The family realizes Sam's graceless fumbling saved their lives, and they share a kindly laugh in appreciation of his efforts. Later, they learn the source of Sam's joy: He'd won the lottery. The wind whispers "Wah wah," and the sound resonates louder and louder, until it seems to be emanating from Heaven. It turns out to be Gabriel's (muted) Trumpet announcing the apocalypse. Thus endeth the worst week.