COURAGE: The Diabetic Superhero, submitted by mateo. One of the main complaints about Superman is his inability to resonate with current comic book fans. Simply put, the guy doesn't seem, well, human. For Christ's sake, the guy can fly, deflect bullets and large rocks shaped like bullets (or even large rocks with a bunch of bullets taped to the outside), and fly so fast around the sun that he travels back in time and is able to prevent Kahn from putting a grub inside Captain Kirk's ear. It's hard for normal human beings like you and me to relate to a guy so seemingly perfect in nearly every category. Sure the writers try to spice things up a bit by lacing Superman with a few personality flaws such as his inability to successfully beat women without getting caught or the time he ordered a gin and tonic and requested Bombay Sapphire gin but was instead given Seagram's London and the bartender thought he wouldn't be able to tell but, hey, he really could. But we need a hero that struggles with real life, everyday issues we can look at and say, "you know, if that guy wasn't wearing an entirely Spandex costume with pictures of what appears to be a stork shooting fireballs from its storkian nipples, and if that guy wasn't currently flying through the air and exchanging blows with a 500-foot robot with 500 feet, I could easily relate to him." This is where Joshua Kell, aka COURAGE, comes in. 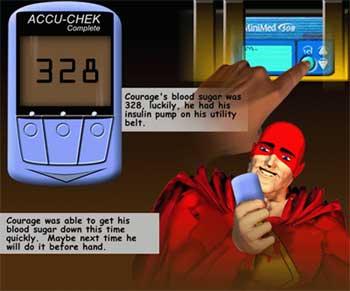 You see, Courage is one of the first openly diabetic comic book characters to deal with various diabetes-related drama ever since DC canceled "Rip Stabbings: The Man With High Blood Sugar Levels" which was about a African-American weightlifter who fought incredible enemies such as Captain Krispy Kreme and his sidekick, Glucose Boy. The main difference between Courage and all those other run-of-the-mill generic superheroes is that Courage not only struggles every day with the never ending battle between good and evil, but he also wages a never ending internal war between his forces of Otter Pops and insulin. He additionally somehow finds time to adopt the most disturbing facial expressions possible, perhaps in an attempt to reassure fellow diabetes victims that "hey, life sucks, but at least you're not this guy." Please note in the following image that Courage has exported his eyebrows to the outside of his red mask, perhaps in an attempt to bewilder his enemies.

Courage's arch enemy is the evil Sugarosis, formerly a semi-normal man named "Lutchow" who becomes slightly anti-normal after Courage shoves him into some "chemicals" at the Research Headquarters for Juvenile Diabetes. Of course this whole event begs the question, "how does somebody go from robbing banks to robbing juvenile diabetes clinics?" Seriously, that's probably one of the most worthless places in the world to break into. Ooooh, Lutchow is stealing a box of 100 blue pens that read "Diabetes Isn't Very Sweet" on them, wow! Watch out, rumor has it he's thinking of knocking over the water cooler on the second floor! If he's able to sabotage that, the research facility's project budget for next quarter will be doomed! Courage foils Lutchow's notorious Juvenile Diabetes Research Headquarters break-in by gently shoving him into a vat of "chemicals." See, when you're doing research you have to use a lot of "chemicals" or else you probably won't be able to solve whatever thing you're trying to solve. Also I think you have to use equations like "X=43" or in some instances "Y=43." Courage manages to escape before the "chemicals" explode, because that's what chemicals do, but Lutchow isn't as lucky. Actually Courage isn't as lucky either; take a look at this: 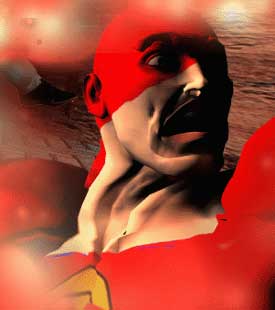 Apparently exposure to diabetes research "chemicals" causes your neck to turn into some swanky Silly Putty and Play-Dough hot dog bun hybrid. This explains why I failed chemistry in high school. After this incredible battle, which lasted less than a single panel, Courage finds himself immersed in an ethical debate which tears his world apart. He asks himself, "I've killed a man... could I have saved him?" to which I answer, "no Courage. No, you couldn't have saved Lutchow. Nobody could've saved Lutchow, for he was breaking into juvenile diabetes research centers and he was obviously already dead inside." The comic refers to this event as a "morale dilema," and I really can't argue with that since it's a made up phrase. This aforementioned crisis doesn't last long, as Courage suddenly remembers he needs to check his blood sugar level, so he asks a woman whose head rotates 180 degrees around her neck to give him his meter. This woman also has a small dog strapped to her back, which I assume is an analogy for, well, something. 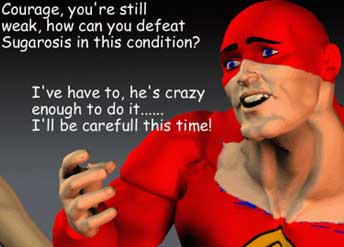 Cut to six months later. Courage is still wearing the same outfit inside the same room that has no walls or central lighting system, and Lutchow has renamed himself "Sugarosis." A message appears on some sort of box-type contraption informing Courage that Sugarosis is "At Union Terminal," which apparently is some major crisis because he's not allowed to travel on trains or something. Courage vows to defeat him (again) and maybe push him into a new vat of chemicals which might turn him into a villain named "Wheatman" or perhaps "Saltface." Unfortunately, Sugarosis has a secret weapon up his sleeve: a gun that shoots "a blood sugar enducing ray!" Oh no! How on Earth did Sugarosis find Courage's one weakness? He must have been granted the supernatural powers of godlike perception when he fell into that tub of "chemicals" at the juvenile diabetes research headquarters! Courage decides to get shot in the chest with the evil sugar gun, causing him to feel weak and stand in place with a very unpleasant facial expression. This is what happens when you have diabetes and your blood sugar gets too high: you just stand there and look mildly displeased while staring off into space. Oh yeah, you wear red spandex clothing and a cape too. 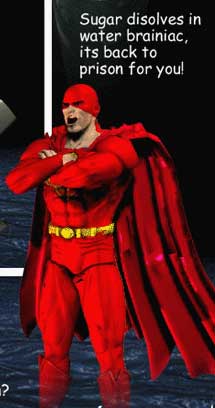 His superhero sidekick "Monitor," whose powers consist of "being poorly modeled in Poser," picks him up on a motorcycle and they flee back to Courage headquarters, which I assume is in the back room of an Arby's or something. After a tense and stressful scene where Monitor and Courage look at something while something does something to something else, they receive word that Sugarosis is up to his old tricks again and is preparing to "Blow up the children's camp." Yeah, way to prioritize, Sugarosis. Shoot Courage with your sugar gun so you can rob the diabetes research facility to obtain the necessary tools for blowing up the "children's camp." I'd hate to know what fiendish plot he had in store after the camp. Maybe he was planning on hanging outside a Wal-Mart and waiting for somebody to put a quarter into those little airplane rides out front, at which point he'd push them off and enjoy the remaining 10 seconds of the ride himself. Courage flies to the children's camp, which is a very gigantic underground sewer system on an island, and encounters the evil Sugarosis who immediately blasts him again with the Sugar Gun. You'd think that Courage would put a bit more effort into avoiding that thing, but perhaps he's too busy disfiguring and contorting his face to avoid gunshots. Eventually he tricks Sugarosis into stepping into the water, at which point he kicks him and proudly announces "it's back to prison for you!" I guess we are to assume he goes back to prison at that point, although it's fairly likely Sugarosis just kept shooting Courage in the gut with his sugar cannon while Monitor sat in the Arby's, trying to figure out how to make her motorcycle drive on water.