This is a campaign to provide Disney a chance to course correct with the Star Wars motion simulator franchise. The fans are completely divided and the core goal of the Star Tours travel agency has been abandoned.

The hero archetypes of the original theme park ride is what made it so great, it made characters everyone could relate to regardless of their background and beliefs. No longer having this core element along with poor storytelling, has made the StarSpeeder 1000 passengers divisive and in disarray.

Our team of imagineers is offering to contribute the design and construction of a remake in order to save Star Tours. Pledge your money and spread the word about #RemakeStarTours now to let @RobertIger and @RianJohnson and @Disney know you want this! 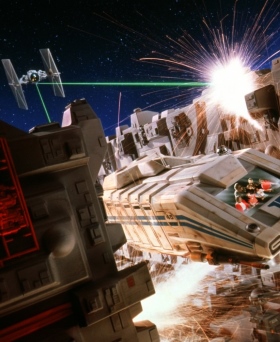 My plans for the Star Tours: The Adventures Continue remake are simple and brilliant.

First, we get rid of all the agendas. This is about Captain RX-24 taking tourists on a sight-seeing journey to the forest moon of Endor. It's about good guys and bad guys. This is not about nuance or an inappropriately high number of women and minorities.

Next, we rewrite all the dialog to be about me, specifically. This attraction will exist in my back yard. Other people can come ride it, but not without me. As such, it only makes sense that the characters should acknowledge me and my tremendous courage at every turn.

The ride begins with Captain RX-24 accidentally crashing the StarSpeeder through a maintenance bay door. At this point the shamed droid asks me to take over as pilot. This is because I have the Force and it is even more powerful - much more powerful - than Luke's force.

With me as the StarSpeeder pilot we take on the Death Star and I kill it with one hit. First try! I do all the starship moves from the movies better than Han Solo. The characters are amazed.

Then during the lengthy medal ceremony Darth Vader shows up. Suddenly Obi-Wan Kenobi throws a real light saber into my hands and my hands catch it. I click it on to the "on" position and the energy comes out for real. The light saber is completely functional and I can keep it after the ride is over.

I jump through the cockpit into Star Wars and fight Darth Vader. He begs for mercy but I conquer him and decapitate him very quickly and am a hero. No one thought it could be done, and a robot makes a beep of awe as I pensively squint and the wind blows my hair.

The StarSpeeder leaves with all the other passengers. I remain in Star Wars forever being best friends with all the good guys and fighting all the bad guys. I say all the best lines from the movies and the dog man respects me too much to sass me. The adventure never ends.

My vision for this remake will turn things around. By including all the elements that define Star Wars for me personally, it will satisfy and unify everyone else and capture their imaginations.

Please contribute what you can, and spread the word by linking to this page. #RemakeStarTours