The All-Seeing Eye of Justice

The Illuminati caught the planet in an evil tractor beam. I'm glad these are the guys looking out for my safety.The debate on security against terrorism has been heating up recently here in the United States with the announcement that a more than slightly sinister new project is underway in Washington. In case you missed it the Defense Advanced Research Projects Agency, or DARPA (who you might remember from video games) is developing a new system to compile data from hundreds of consumer and public databases all around the world. The system, which is called Genisys, will run on super computers that possibly feature Blast Processing and will "data mine" for people who have buying, travel, or net surfing habits that make them suspect of terrorism. Seeing as how I review Hentai games and write inflammatory articles about stupid shit like this for a living this is all more than a little troubling.

The project is being managed by the DARPA's daughter agency the Information Awareness Office, which has a logo even more sinister than its name. While I would like to hope that this program disappears into the same void that John Ashcroft's hideous and ridiculously oppressive Operation TIPS did, I have a sinking suspicion that this bird may actually fly. Which means that it's time to start planning ahead! I've never considered overthrowing the government and I hate the terrorists as much as Johnny McIsrael, but for some reason I just don't want them to see all of the dirty crap I have been up to with my computer and my credit card. While clearing my cache on Internet Explorer is a good first step I don't think this will help much unless Genisys incorporates Bonzai Buddy technology.

The entire day I have been carefully planning how to stay off the government's ten most wanted Internet Terrorists list. Since I figure there are a few Internet Terrorists who may be reading this I thought it would be helpful if we create a network - or "cell" if you will - to assist in subverting the government's means of keeping track of us. Keep in mind that if you want to blow up America this information is not for you because I don't support anyone who wants to blow up America. Except maybe Cobra Commander, but that's just because I feel sort of sorry for how bad of a terrorist he was. Without further ado, I present my seven easy steps to avoiding suspicion of terrorism 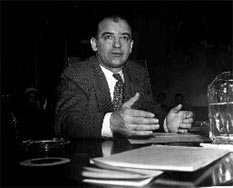 Back in the days of Joseph McCarthy things were so much easier because the bad guys carried cards. Man I wish we could go back to that simpler time.

One of the easiest ways for the government to trace you is by using a credit or debit card to purchase engineering explosive for your plans to blow up the head of the Statue of Liberty. To avoid the paper-trail that follows credit transactions I suggest using either cash or the barter system. For example, when I purchased three hundred kilograms of liquid nitroglycerin from Aimes Demolition and Excavation in Toronto, Canada, I offered to trade 7,500 homemade cookies and a whole hog. The alternative would have been using 20 dollar or higher denomination notes which contain tracking devices from the CIA.

Step Two: Book Return Tickets on Aircraft You Plan to Crash Into Buildings

A big red flag for the revolutionary traveler is to only buy a one way ticket when moving across oceans. If you're coming from say Qatar and you purchase a one way ticket to St. Louis, Genisys might just cause your profile to "Alise from the Glaive" and be brought to the attention of a government agent. To avoid this make sure you always purchase a round trip ticket. If you can get away with using a fake name when paying for your tickets that's even better. Try something like "Joe America" or "Ronald Freedom".

One of the best ways to get drugs and other illegal substances across the US/Mexico border is inside hollowed-out cadavers. Unfortunately the U.S. government has been using dogs trained to sniff drugs inside human corpses in the wake of September 11 and the dead body route seems no longer valid. Fear not! While the dogs may be able to smell that 3 kilo package of H you wrapped up and put inside old Xavier's skull they can't smell liquid Heroin when it saturates brain tissue. Next time you need to ship some china white, dissolve it in citric acid and then let a few human brains soak up the juice. Then return them to the skull (doesn't have to be the same skull), zip up the head, and send them packing back across the border. While this doesn't actually help with Genisys, I figured while I was giving out tips of the trade I might as well include it.

Fill your e-mails with inane and innocent spam for at least five lines before you begin to include key words and phrases for your intended recipient.For months now Al-Qaeda has been using code to send e-mails undetected past FBI agents, but with the advanced algorithms of the new Genisys system promise to quickly crack this code. Instead I suggest taking advantage of the limited computing potential of Genisys by secreting your message at the bottom of a seemingly innocuous message, similar to something you might send in Animal Crossing. I've been using the "KITTENS" method wherein I make the subject and first five lines or so of my message nothing but the word KITTENS. Genisys only scans the first five lines on cursory processing and if you can stay below its radar it will never look any deeper.

So you're a Great Old One who waits dreaming at the bottom of the ocean for your cult to prepare the way when the stars are right. But being the boss isn't all fun and games at a hundred fathoms, you have to keep up on current events. Unfortunately, now that Genisys threatens to collate all legitimate telecommunication data your cell calls to the lost city of Kazbullah will quickly be traced back to R'ley and you can't have that. Your options here are to either physically steal cellular phones, thereby casting the all-seeing eye of Genesys on innocent customers, or clone the signal of a legitimate cellular phone.

The Swiss banking community will likely not cooperate with the Federal government's new program. If they laundered money for escaping Nazis they'll launder money for a plot to replace wax figures at a New Orleans wax museum with radioactive "dirty" scorpions. This is an awesome plan by the way, because the scorpions will sting people and poison them AND irradiate them and when a doctor goes to suck out the poison he'll catch radiation too and die from lip cancer.

Step Seven: Do Not Use Mid-Stage Lamp-Posts to Save

I previously mentioned that doing "top level" searches Genisys will limit the depth of its search. It does not search through save games that include end of stage states, it will only search lamp-post save points. If you can maneuver around the lamp-posts in a stage, collect all of the rings, and defeat the level boss, you should be free and clear from detection. Unfortunately if the game uses codes then the Genisys system will already have a complete database of these codes and will search for them. This does not work on the save codes for King's Bounty as the system hangs up trying to process all of the ASCII characters involved in a single one.

Add A Little Variety To Your Life

Hello, it's me, Livestock, letting you know that there is a new Photoshop Phriday online. This week is a Variety Pack, which is the second one of those we've done. It features a wholesome brew of images from four different Photoshop threads that appeared on the Something Awful Forums. Take a look: 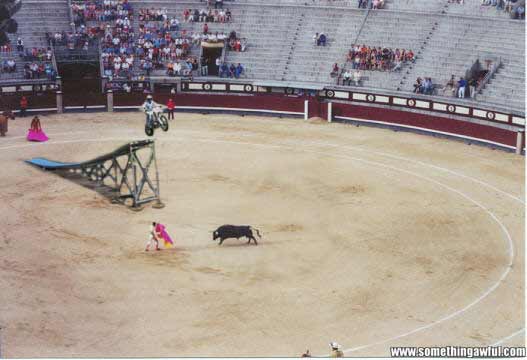 Themes covered include: "Ways to Improve Bullfighting," "Awful Movie Sequels," "The Next Generation of Soda," and something so stupid I'm not even going to say. Give it a whirl already!