Thursday, Sep 29, 2005 by Reid "Frolixo" Paskiewicz
Know of an awful site? Send it to us and become a hero!

Diablo Pit Kennels, submitted by Glukel. You know that saying about how a pet usually reflects the personality of the owner? Well I'm pretty sure this site proves that theory true because these specially bred dogs are fat, ugly, and stupid. Of course their owners love them so much that in all the pictures they are chained up to a fence or eating a tire for lunch. These are the type of people that show their dogs off around the neighborhood as a status symbol, but don't have the mental capacity to care for them. The totally radical site layout is indicative of their nature: white trash the like to watch dogs hump. 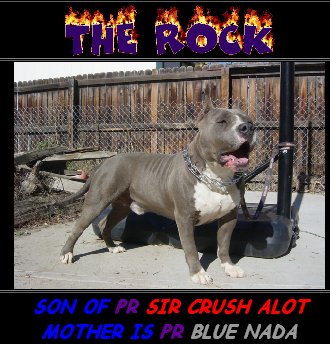 I've got my money down on "The Rock", who is the son of "Sir Crush Alot", so you know he's gotta be a good fighter. I'm planning on putting him in the ring vs. Vlad the Impaler from Battlebots. Thank you Diablo Pit Kennels, for breeding butt-ugly monster dogs that will someday escape your compound and take over major city, leaving scores of dead in their wake.