Roger Owen For Congress, submitted by scientician. Roger Owen is a man's man. He is a "Southern Democrat," and according to his site, he is damn proud of the fact. Apparently he is also a great humanitarian, since he obviously hired the kids they hide in the basement of the hospital to design his Web site.

I mean, look at this. Besides the fact that the page features twenty different colors of text (in various sizes), we're also forced to look at his giant chipmunk face before we have a chance to shy away. The text is apparently self-aware, too, since it seemed to align itself to various things on my desk instead of the margins of the site.

But what's the real reason we should vote for Roger Owen? The pictures. Besides a group of pictures of a swimming pool being built, we also get this amazing piece of art: 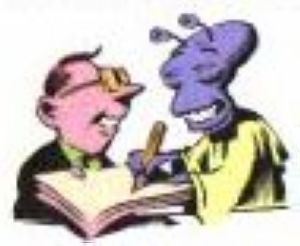 C'mon, people. The man rebuilds pools and talks to clip-art aliens. Vote Roger Blake or throw your vote away, you communist ninny.