When I was a dorky kid, whose only friends were Mario, Zelda, and that frog thing from Blaster Master, I always dreamed of going to the big electronics Mecca known as the CES. Instead of sneaking copies of Playboy like normal kids would, I'd always have highly sensual, erotic fantasies about playing all the new games before they came out. In retrospect, this probably explains why I had very few friends, and also why the ones I had were very weird and nerdish and wore star trek uniforms 24 hours a day. Still, the dream persisted into my teen years, and the videogames industry grew to have a new trade show: E3. The Electronics Entertainment Expo. Now, most nerds see this as an unreachable destination, as I once did. But then I discovered the Internet, a wonderful dreamworld where anything is possible except getting laid! I began to write for websites, and before I knew it I found myself actually attending this wondrous convention of magical wonderment and wild reckless abandon! I also learned many adjectives and adverbs, some of which were used in my previous sentence!

This respectable young lady hates you very much.E3 isn't for everyone. Not open to the public, the convention is only for "Industry Insiders," who are regular, often times stupid people that like to make themselves sound really big and important by calling themselves "Industry Insiders." In reality, attendees are just a bunch of videogame nerds who may in some way or another be tied to the industry by working in various Electronics Boutiques or Babages across the country. Each one wanders around, arguing PC Vs Console, Nintendo Vs Sony, Xbox Vs pounding your scrotum with a stapler, and all the while not being properly admonished. In the real world, the nerds' natural predators, such as the jock or the wild frat boy, will hunt these dweebs down and keep them in check with harsh words and beatings. At E3, this element is completely removed, allowing the nerds freedom to say and do whatever they please. This, unfortunately, is a double-edged sword. While it may make you feel better about yourself, it can also blind you to your own nerdish leanings, and thus fool you into thinking that some of the models attending will actually like you...

Oh, that's right, I hadn't previously mentioned the models. Videogame companies have unlocked the secret of getting the attention of nerdish males: Breasts. Though it's officially called E3, there are a fourth and fifth E which the promoters of the convention leave out: "Exploiting WomEn!" As such, there are scantily clad attractive women everywhere at E3, often adorned with company logos and not much else. There are certain things that you have to learn about these girls before you try to talk to them though...

FACT: They hate you

FACT: They hate this job

FACT: They hate you a lot

FACT: Someone hates you. Enjoy guessing who!

Yes, unfortunately for the average E3 attendee, these sexy model types are far out of reach. Not for me however, as I am a master of seductive hypnosis. This delusion is what keeps me coming back to E3, and until I bag a model or die in a fiery implosion, the dream will refuse to die. The only chance anyone has is getting the girls drunk, which makes for one ultra smooth segue into my next topic: Booze! As well as being a big, hunky trade event, E3 is also one of the drunkest weeks of the year in my experience. The second the show ends, people file back to their hotel rooms in an orderly manner to pound liquor and get quite disorderly. I'm certainly not a big drinker, but there's something about blowing $300 bucks on a ticket to LA that makes me want to down a bottle and a half of Jose Cuervo's Personal Family Reserve.

Still, despite the ridiculous nerds and mantastically sexy models, E3 is really about the games. But what games are going to be the big ones at this convention? Well, we here at Something Awful dot com are avid gamers, and thus have chosen several as our "Games of the Show...of the FUTURE." 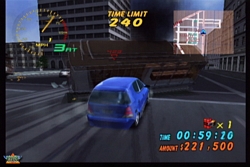 The game everyone's been hotly anticipating! Look at those graphics...those cars look like they're built of ACTUAL 3D POLYGONS! Just like those spaceships from the Hollywood smash hit "Wing Commander!" Making a huge splash with the other games in the series, Runabout 3 Neo Age should provide everything you've come to expect from the series, which is a lot! Loaded with subtle touches like mysterious invisible ghosts and real-time modeled air with a careful nitrogen / oxygen balance, this should be THE GAME to look for on PS2! 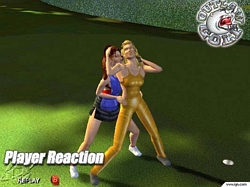 Combining the raw speed and energy of golf, with the intense action of a prison rape scene from "Oz," Outlaw Golf is out to set young men's hearts ablaze with passion! Based on the same principal that sent the XFL skyrocketing to glory and the sky, this game coincidentally pits outlaws against each other in golf! Characters are to include that big black guy, the little crafty black guy, the lovable Mexican, and the scared white tax evader. Watch those clubs boys, external use only! 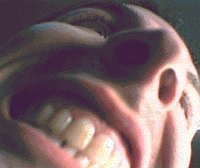 Since most reports have said that playing X-Box is like having your ballsack trampled by a hoard of a thousand wily bucks, Microsoft has decided to create this ultra-realistic simulation. When you pop this baby into your X-Box, it feels as if you are REALLY THERE, PLAYING X-BOX! This is the future of gaming, people! 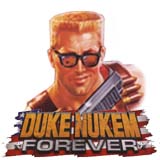 Some games take a while to make. This one is going to take...FOREVER!

Soon, E3 will be upon us. At this time next week, I will be playing games of the future and drowning myself in alcohol to extreme comedic effect. That is, until I die of alcohol poisoning, which will be marginally less hilarious. While in LA, I hope to anger and alienate any people I find, especially fresh-faced Japanese developers with limited English language skills. If you're interested in day to day coverage, I will be reporting on the happenings daily for my jive ass brothas at Nintendorks.com, and when it's all over I should have a fairly incoherent article written for Something Awful about what actually went down at the show this year, bursting with grammatical errors and poor sentence-level clarity. Sounds bad, huh? It sure will be something awful! HAAHAHAHAAHA, whoever came up with that one is a genius! Until then, I bid you fine readers farewell, as I'm off to LA!