A couple of weeks ago, I acted like I was familiar with the great writers of our time by showing you examples from our forum goons of how these literary greats began writing in their younger days. Apparently, some of you enjoyed this article. I can tell this because I received considerably fewer death threats that week. Here's the second part of this light-hearted take on the joy of writing. Let's discriminate against the illiterate by enjoy the following pieces of writing. 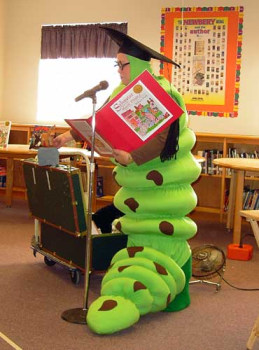 I Should Prol'ly Tell You, by Little Billy Williams, age 7

Donald Mulvaney frowned as he stepped out of his father's red Ferrari. He wasn't usually this late to school. It's the damn divorce, he thought. Ever since Mommy and Daddy had split up, things had been hard on the kids, and Daddy had a $2.8 billion deal to settle with the Japanese--and somehow despite being on the cover of Fortune and attracting investors from Chicago to Czechoslovakia, getting the kids to school on time had sort of fallen by the wayside.

At least I'll be on time for snack, Donald thought, and tried to smile. Rumor control around Mrs. Vincent's kindergarten had been pretty tight ever since NCLB had federalized the department, but a few people were saying it was peanut butter and jelly sandwich day.

He didn't even have time to set down his backpack before the bullpen opened. "This came for you, Mr. Mulvaney," said Mrs. Vincent with a sweet smile as she passed him a readout. He adjusted his glasses, thought of Mommy a moment. Then sighed and began to read.

And on, and on. Donald knew he'd never be able to make sense of the baffling stretch of code. He looked around the room for someone who might be able to explain. Maybe Thaddeus Wu, the bespectacled tech guy, whose Mommy taught at Stanford before entering the private sector. Or Arnold Gross, logistics and development. Or Serena Mayenberger, tall, blonde, confident, the new kid on the block from across town who had a way of chewing on her nails.

Maybe not Serena. They'd slept together once, on the same rug at naptime, and afterwards things had never been quite the same. Donald pressed his hands to his temples. Shit! How he was supposed to hold down a table and make a peanut butter sandwich all at the same time was beyond him.

Up front, Mrs. Vincent was chattering on: "The peanut butter sandwich was covertly developed in the 1950s as a counteraction of Soviet cultural adventurism. Unstable geopolitics can and should be countered by keeping one's own nest in order. America doesn't make anything but sandwiches any more, maybe, but this'd keep Sun Tzu out. With that said, we've created a new protocol of synthesizing peanut butter with jelly that the Japs'll pay through the nose for. It involves a hyperadhesive telomerase compound in the jelly that spreads with selective viscocity. Imagine it like this, hold out your hand. See how if you spread jelly on the top of your hand, it'll just sit there... but if you spread it in your palm, it'll adapt to the individual corners and cracks. This is the wave of the future. This classroom is sitting on the very genome of snacktime."

THE TRAGEDY OF WILLIAM AND JAYNE by William Shakespeare (Aged 9)

Chor. The best of friends, both equal in measure,
Attend'd to their school, one afternoon,
To find that, at one fair maiden's leisure,
Their friendship did not seem so opportune.

ACT I. Scene I.
Stratford, Yard of King's New School.

Enter William and Christopher (with quills and satchels) of the class 4B.

Will. Christopher, on my word we'll not do homework.
Chri. No, for then we shan't have time to play.
Will. I mean, and we be in trouble, both us.
Chri. Aye, while thou trouble'st thyself not.

Will. Back thee to the wall, a maiden wish'st to pass!
Chri. [backing] Verily I should share with her mine apple.
Will. [aside to Christopher] But mine apple has fairness deserving of her!
Chri. Thine apple is as bitter as thy face;
She will not care about, nor take to't.
Jayn. Why quarrel'st thou so over thine fruit?
Is fruit not fresh as any, should it be eat'n?
Will. Fair maiden, I beseech thee to try mine apple.
Chri. Nay! Mine apple is as fresh as the day is;
Fresh as the lightest cloud amongst the sunrise.
Will. Thou trie'st too hard, methinks.
Jayn. [to Christopher] Your apple is the fresh'st I have seen, however;
I have mine own apple. Would'st thou care to stroll with me?
Verily our apples and company become'st as twice;
In companionship with each other. [Exit Jayne and Christopher]
Will. A plague o' both your apples!