Tuesday, Mar 14, 2006 by Rich "Lowtax" Kyanka (@TwitterHasBannedAllMyAccountsEver)
Know of an awful site? Send it to us and become a hero!

9-11 AND STEALTH JEWISH, submitted by Pantaloon. My grandfather used to tell me, "Richard, the only thing worse than a Jew is an invisible Jew." Then he'd ask the lamp what time it was. While we can all agree that the Jews are just a terrible menace to society, with their "religion" and "motorized carriages" and such, many people don't realize that there is an even more dastardly sect of Jews: THE DREADED INVISIBLE JEWS. That's right, the so-called "stealth Jews" are able to do a bunch of horrible things without being detected by non-crazy people who possess any kind of Photoshop or logical reasoning capabilities. 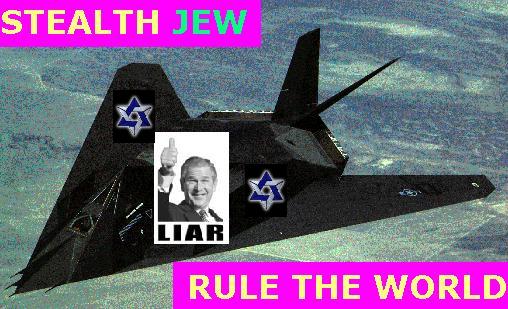 This website presents a series of concrete, irrefutable facts which "the establishment" is too afraid to report, nuggets of truth such as:

- A stealth Jewish, Osama Bin Laden successfully created reasons for his fellow stealth Jew, G. W. Bush to invade Afghanistan, pretending to be a enemy to U.S.A. He was there, therefore, Bush could invade. He would appear in Syria next, then, Bush can invade Syria. An active CIA agent in charge of making Bush's crime excusable.

- U.S. media are completely controlled by Zionist Jew, therefore, never tell you the truth about stealth Jew and 9-11 Jewish coup. They know Rockefeller and Bush did it. But, Jew-dominated media are protecting their "SAME KIND" stealth Jew, allowing them to continue massacre and looting.

- Stealth Jewish/Zionist Jewish currently rule U.S., U.K. and the rest of the world, but, no one realize it except themselves.

Huh? I don't get that last point; I mean, why didn't the author just write "INVISIBLE JEWS RULE THE ENTIRE WORLD?" If he just says "Stealth Jews rule the Earth" then it's kinda assumed the US and UK are included since, the last time I checked, they were still bolted to the planet. Also, if invisible Jews rule everything, why are they still bothering with their wacky plots to blow up stuff and invade countries that they apparently already own? That's like me sabotaging my own blender in order to prove to myself that I still own my kitchen. Damn stealth webmasters!

Oh yeah, and in case if you were curious, Hitler was apparently a Jew according to this website. Maybe the webmaster should start a page listing the nine people in the history of the universe who WEREN'T invisible Jews. It'd take much less time.