An EDF Squad Explains the Plot of Earth Defense Force 4.1

Soldier 2: But it's been seven years since we defeated the giant insects! Tell my family I love them! 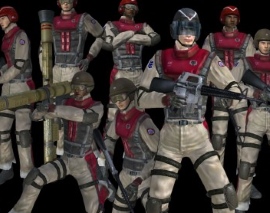 Soldier 3: We must not allow the giant insects to take over our planet! Hey, we're buddies!

Soldier 4: It is my duty to complete these missions! Kill so we can live! Why did you sign up for this assignment?!

Soldier 4: Hey are you married?! Why did you get married?!

Soldier 1: For my wife! I'll think about it! The captain is dead!

Soldier 5: My wife is making a special supper!

Soldier 2: Killing this many bugs will make my wife proud!

Soldier 4: These are flying insects?! Why is this happening?! Did you tell your wife?!

Professor Scientist: Forgive me for intruding on your frequency. I have been researching these giant bugs, and my findings may just be the key to saving our planet from disaster! From our perspective, these giant creatures are insects, yet to them we might be seen as the pests. It's truly an enigma. These bugs are tougher than they were when we defeated them seven years ago. However, our guns are also tougher! It is my belief that hitting these insects with our strongest guns is our best chance of stopping them. Are they our intergalactic neighbors, or something more sinister? Eliminate all the aliens!

Soldier 6: How can such a spider become so large?! AAAAHHH! You killed everyone! I'll tell my wife later!

Soldier 2: Are you scared?! I agree! We have to kill these people-eating monsters! Don't shoot the mothership, we aren't sure if it's related!

Soldier 1: Easy for you to say!

Soldier 7: Whoever kills the most buys dinner! That's the rumor!

Deus Ex: Mankind Divided
Deus Ex is a Latin phrase meaning, "save the ending for a sequel or DLC." 8/10

Attack on Titan
To bring down a titan you need to cut a particular spot on its neck, and to bring down an otherwise good game you need to make the player do this repeatedly for hours with next to no variety. 6/10

Forza Horizon 3
My ability to enjoy good car games has been ruined by memories of E3 presenters stroking boners about being able to zoom in on realistic upholstery textures. 7/10

ReCore
When the mandatory collect-a-thon kicks in, you'll realize the person who named this game had a nasty sense of humor. 6/10

Phoenix Wright: Ace Attorney - Spirit of Justice
*waves at you to cross the crime scene tape and look at the clue I'm crouched over, a scrap of butcher paper with "BUY THIS GAME, DUMMY!" scrawled upon its surface* 9/10

Metroid Prime: Federation Force
An underwhelming spinoff of a beloved sci-fi franchise whose previous trilogy ended with a confused shrug years ago, a perfect way to inoculate yourself in time for the leadup to Mass Effect Andromeda. 4/10